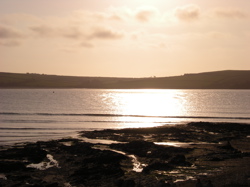 Gorging oneself in London can be as stressful to the system as running too many marathons in any given week.  It was with this thought in mind that my better half and I decided to board the Great Western and follow our noses west to Cornwall, and in particular Trebetherick on the north coast.

After arriving in Daymer Lane (a well trodden slopey drive down to Daymer bay – familiar to all Betjeman fans), we settled ourselves in the evening sun looking up the Camel estuary towards Bray Hill and cracked open a chilled romantically fruity and refreshing Reisling Trockenfrom Dr Burklin-Wolf, 2007.  I gargled and gulped, swirled and yelped.  In the evening light this wine slipped down so nicely guided by the mouth watering gush of the gums.

That consumed we immediately left for the very discerning St Kew Inn in the village of the same name which has recently acquired a chef who, I am told, acquired Michelin star status in his previous posting.  The best thing for me about the St Kew is getting a good pint of HSD (Local ale where the “s” stands for “Strong”) and planting myself in front of the large fire constructed in such away that it is literally chest high.  The second HSD combined with the fire and shining huge slabs of Delabole slate flooring create an ambience of north Cornish hospitality.

We settled down to the table to the right of the fire and my gracious lady ordered the  mackerel paté and I another HSD.  We often have this dish as a light starter as that is exactly what it is.  Local mackerel in these parts is absolutely amazing, loaded with flavour and freshness and often such good value there is little point in eating much else (though pointless pleasures are where we are so… ).

For the mains we opted for crab cakes with salad for she and pork belly with apple puree for he.  My pork was cooked and presented exceptionally well.  My mouth puckered with gorgeous flavours and my mind gratefully blessed the animal that provided this meal.  For the crab cakes they too are a local treat.  It is worth being down in Port Isaac when the fishermen bring in the crustacean catch.  At first one feels alarmed that they could quite possibly wipe out the whole species in just a few cathes but this feeling is soon subsumed by hunger and desire and there are plenty of places in the area to sample (either The Slipway restaurant in Port Isaac or Port Gavern Inn over the hill (in Port Gavern), offer great food and different levels of pricing).

With the food done and the porky bellies full we sat and read.  I, Robert Peston’s ‘Who Run’s Britain?’ and she, The Daily Wail, before heading bedward to Daymer Lane.