AFTER almost 2 hundred years beneath the Baltic sea, the world's oldest champagne has...

The pronouncement was delivered at a tasting in Mariehamn, in Finland's Aaland Islands, to sample 168 bottles uncovered by divers last July in the shipwreck of a two-masted schooner between Sweden and Finland.

A minimum of 3 of the bottles were established yesterday as from the present day successful Veuve Clicquot house and others came from Maison Juglar, that went out of business in 1830.

The sunken vessel, located in 2007, 50m below the surface of the sea, is thought to have gone down around 1825 to 1830. Experts have been impressed with the quality of the champagne. Most of the bottles still had their seal. "Great! Wonderful!" pronounced Richard Juhlin, a champagne writer from Sweden who has tasted the Cliquot and Juglar. "I think what strikes you the most is that it's such an intense aroma," he said.

The Juglar tasted, he said: "more intense and powerful, mushroomy," and the Veuve Clicquot much more ike chardonnay, with hints of "linden blossoms and lime peels".

He added: "Bottles kept at the bottom of the sea are better kept than in the finest wine cellars." 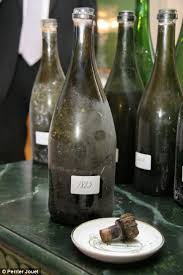 Francois Hautekeur, of Veuve Clicquot's winemaking team, spoke of "a toasted, zesty nose with hints of coffee, and a very agreeable taste with accents of flowers and lime-tree...Madame Clicquot herself must have tasted this same batch," he mused, with reference to Barbe-Nicole Clicquot Ponsardin, who presided over the famous Champagne house.

No labels survived on the bottles, brought up from the sea over the last few weeks and gratefully tasted by the divers involved in the salvage. Experts dated the wine to the early nineteenth century.

Before this underwater cache was found, the oldest drinkable champagne known to exist was considered to be an 1825 vintage that is still in the cellar at the Perrier-Jouet house.

The boat was likely on a journey from Germany to Finland, a Russian province at the time.  A rare fine wine of equal standing also entered the record books on Tuesday evening: an imperial-size bottle of Cheval Blanc 1947, a very rare Bordeaux, sold for $US304,375 in Geneva; the highest recorded price for a bottle of wine.