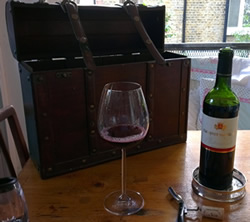 I stopped by the Chiswick carboot sale this morning for a gander about to see if there were any bargains to be had.  Interestingly, one would expect this school playground of "booters" to be all local folk emptying out their garages or attics, but not a bit of it.  Chatting to one stall holder she said that she arrived from the West Country, somewhere near Bristol at 2am and the queue for pitches was all the way round the corner.  "I was worried I wouldn't get in.." she said.  So it was with less surprise that I discovered a French lady unloading a huge truck/van hybrid that she had single handedly driven over from France.

My first purchase here was a Bavarian teapot of fine china which I quite liked.  Then piquing my fancy was a large wooden and leather wine carrying case.  I immediately pointed at it and said "how much?"
She replied, "Non, monsieur, that is for displaying the wines only. Not for sale!"  I walked on slightly despondent but admiring her restraint. 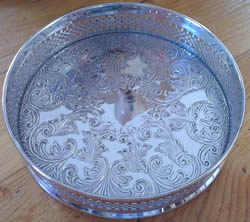 After walking around as much of the boot sale as I possibly could - it being vast with people clambering everywhere inspecting all manner of bits - I came across a rather nice brass silver plated wine coaster.  I paid four pounds for it and carried on.  I then found my self back near the French lady and thought I would try her mettle once more on the sale of her wine carrier.

"Are you sure," I said, "that you do not wish to sell it to me?" I was at the time buying a small porcelain Limoge pin tray with a picture of the fountain in Vence that I recall sitting round with friends when staying there twenty years ago.  She looked at the aged leather box, looked at me and said, exasperated,
"Arghh, you will have to pay what I paid for it… that is the only way!  It was seventeen euros."  I agreed.  She then walked over and removed the bottles of Sancerre and Bourgogne Rouge that were poking their necks out over the top.

Thus I paid a fifteen pounds for the decrepit but characterful carrier and she was happy.  So happy infect that she threw in a bottle of her lower end cabernet sauvignon that was being offered for sale.

And here I am on a fine Sunday night, just about to do some writing on another project, with lamb slow cooking behind me, the carrier nearby and a glass of this French, fruity table wine in front of me.

It's called L'estaminet, Cabernet Sauvignon with no vintage listed and made in the Languedoc region near Carcassonne.  It is tasty but nothing really to note except that it inspired the meat dish and will accompany it just well enough.