A Compote of Spanish Liquid Red Berries, The Colonel's Holiday Hide Out and Bestial Feasting

Dragging ourselves out from the slumber of another siesta at the villa with the taste of lunch still firmly on my breath, my mind turned instantly towards the evening.  We had pre-cautiously booked a restaurant in the centre of the small town of Valldemossa that sits high up above Deia in Majorca. Valldemossa has its own claims to fame.  Before Robert Graves showed up in his togas to write the treachery of the Caesar's back into our lives, the musical genius Frederic Chopin dropped by in 1838 with his mistress, the feminist writer (aptly named) George Sands.  They took a small lodging in the local monastery in order to escape the gossips of Paris.  Sands wrote the trip up in a book called 'Winter in Majorca' and was quite scathing of the locals who disapproved of their unholy liaison.  She did, however, give due justice to the surrounds which are in most cases breathtaking.  The roads take something to get used to but the scenery is wild and addictive.

Since then Hollywood royalty has swept into town in the form of Michael Douglas.  Good sense might dictate that when you find a piece of paradise you keep it quiet and try to preserve it for as long as possible.  Douglas had other ideas and made a film about what he likes best about the area.  Apparently it can be seen in the town somewhere but I didn't look out for it.

The restaurant we had booked was an old converted hostel with dining on the first floor.  We climbed the stairs and were greeted by a lady ironing away.  As we turned apologising she waved us in assuring us that this was indeed a food serving establishment.

Our table was neatly positioned by the balcony and the evening was warm with a gentle breeze.  From the balcony there was a large view down the valley where the sun had already set.  First things first.  We ordered a couple of bottles of Lagar de Cervera, Alborino 2010 to keep the engines ticking over whilst we were served a range of local cuisine that included octopus and squid mixed with potatoes, greens as well as another plate of cured ham and cheese.  The former was unusual but certainly tasty.  With the refreshing Alborino the first course went very well, the wine crisply washing the food down creating a clean palate for the next shipment of food. 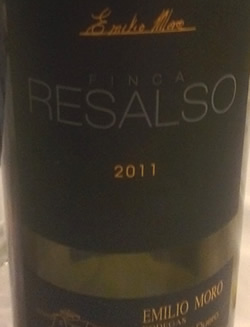 After the starters we went off piste.  You win some… you lose some.  The other three ordered the biggest steaks I have ever seen.  The beast that donated these certainly did not walk away from the deal.  I ordered deep fried chicken and vegetables, a local dish.  I wasn't quite prepared for what came.  It was literally a massive plate of what looked like the idle daydream of a KFC fanatic.  All shapes and sizes of deep fried stuff in breadcrumbs.  I had ordered a bottle of Finca Resalsa, Emilio Moro 2011.  This was a superb choice.  A big wine smashing through the tough breadcrumbs and brittle aubergine that had been given the colonel's touch.  Wines from the Ribera Del Duero are famously special with great depth, bags of fruit and spice and so much more. We ploughed on.  David said he fancied something a bit lighter and Paul concurred.  Thus I thought we go Muga crianza 2008.  I am a huge Muga fan and this baby has a bit of age to soften the tannin and bring the flavours out.

Unfortunately, it is hard to adjust to a Rioja after such a big wine from the Ribera del Duero.  At first I struggled to taste anything.  I got there in the end. Bright red fruits and underlying pleasantness that drives everything from conversation to laughter and, of course, the next bottle.

Our third choice of red was a locally produced.  This was all quite obviously in the wrong order.  The local wines are very good indeed but they tend to be young and light, so after a couple of bigger wines, we were bound to struggle to taste anything.  Again, patience pays off.  By the time we had ordered two more bottles in the next bar we visited, my taste buds were returning.

Of the restaurant I would not rubbish it but I would advise caution on trying to be clever.  They have seen our types before and wheel out the peculiarities of the regional cuisine.  The steak is extremely good if you're a Transylvanian cape wearing gothic.  But it is best to do some homework on what you are ordering.  Other diners meals looked really good.  The wine list is very impressive too.

If you are in this town and want to try it out then just ask around for the restaurant that used to be a hostel.  Everyone knows it.