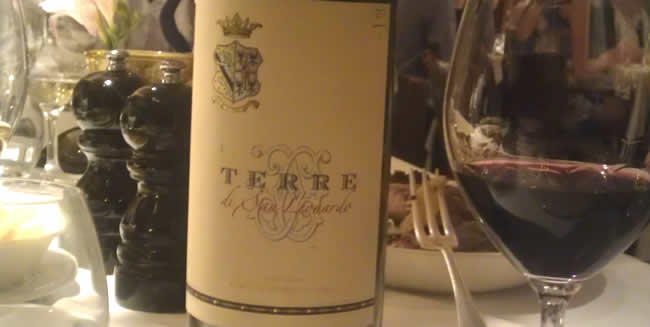 A pre-arranged dinner that coincides with a scorching summer evening is a gift not be sniffed at. I arrived at Gordon’s wine bar by Embankment tube, Villiers Street, to see the entire, very long, terrace completely spilling over with people drifting into early evening with loud chatter, chinks of glasses and a steady eddy of emptying bottles of wine.

Gordon’s is reputedly one of the oldest bars in London. With its' ancient vaulted candlelit seating area and warming view of casks of port and sherry behind the bar, it's no wonder I have been returning here since I first moved to London at the tail end of the 90’s.

When the sun shines in Britain, we react by hitting the streets in a state of delirium in order to enjoy the heat, without any certainty whatsoever, whether this will be the only or last day of summer.

The evening air was luxuriously warm so I ordered a bottle of the light Frizzante made from trebbiano grapes. It was everything it promised to be, dry, fruity, with a little sizzle in the mouth, and perfectly refreshing for our tiny corner of the terrace.

A couple of bottles of this light aromatic trebbiano later, with minds focused on the pleasure of light chat and laughter, we unbuckled the weeks tribulations and made lightly off up Villiers Street towards Covent Garden. This entailed wading through gently drifting crowds until stopping at the famous Lamb & Flag Pub on Rose Street to catch a glimpse on their television of Andy Murray in the semi-finals at Wimbledon. The mash of people outside on the cobbled street appeared to be in a state of sunbleached euphoria. One particular older gent with a wispy white shock of hair and protruding polished pate, sporting front-side Leonardo da Vinci belly-button length beard, summer suit and Gucci loafers, summed up the whole scene. The G&T slipped away passively and we walked on to the Ivy where Julian had a procured us a table.

As we sat down in the art deco dining room, famous, more often than not, for being famous, there was certainly plenty of charm in the air with every table occupied without the room being full. With us variously ordering foi gras, bang bang chicken, duck, watermelon and Argyll smoked salmon to start, I ordered a bottle of the Chablis, Claude Ecuelle, Burgundy 2011. It’s a delicious wine with the punchiness of youth pairing it well with the variety of dishes. The foi gras with peaches and elderflower sauce was deliciously rich and smooth, when follwed by a sip of the Chablis, created the sensation of smiling tranquility.

As the conversation ranged over various topics, one that took my interest was the notion that, as we have a “sort-of” format for our irregular evenings, that we might be described as a “supper club”. It’s not, however, something that I’d agree with, as the arrangements are made with three word emails and arrangements accepted without question. Add to that our lack of membership policy, no secretary, no minutes taken, no AGM, or anything else ‘club-like’ to saddle ourselves with, and you’ll quickly conclude that we’re simply four people who like chatting, forgetting the humdrum of stressful work days, indulging and being merry. I also think that the number of four people for such occasions is good as it avoids too many splinter discussions, whilst preserving the most cherished of dining moments, the quiet that hangs in the air as food and nectar are ingested and imbibed. Suffice to say, we ain’t no club but we’re doing fine!

With the main courses we ordered a bottle of Cabernet Franc, Terre di San Leonardo, Trentino 2009 from Italy. It’s had a powerfully intense nose with a plumminess and smokiness I didn’t expect. It was toss up between this bottle and the Primitivo di Manduria 'Stella Morella', Puglia 2011 from southern Italy. I love wines from Puglia and am always drawn to them out of interest but in this case the Cabernet Franc seemed like a choice that might work as well with the blackened tuna steak as with the crispy pork belly that two of us ordered. It’s a delicious wine with lots of complex flavours of dark red fruits, truffle and a decent length  to entertain the mind. The pork belly was also delicious; the pair found each other as intoxicating as did Bacchus find Ariadne.

And so we moved through to deserts. Being quite full I pulled back on the coffee, instead ordering a glass of the Muscat and the incredible crème brûlée with taste-bud massaging vanilla seeds to die for.

The dining experience is one to try if you haven’t. With exceptionally lovely food, a diverse yet uncomplicated wine list and excellent service, why would you not? Though it is tempting to “people watch” with side glances from the corners of one’s visual pods, the policy on company is strictly BYO. So, on that note, a thanks to my friends present for the elevator ride out of the ordinary where all the elements came together forming a comfortable slot in the memory banks.

As we exited into the night air, passing through busy Chinatown, we stopped into Blacks on Dean Street for a nightcap. The club was all but empty so we took the table in the front room upstairs, ordered a bottle of sangiovese and, with the old sash windows wide open, watched the Soho nightlife pass by beneath us, scratching our contented bellies like happy baboons! All in all a very pleasant evening.