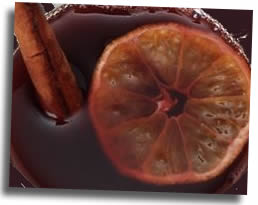 It’s very easy to make a forgettable mulled wine and just as easy to make something remarkable and delicious. There’s one secret ingredient; but apart from that the success of the drink depends on the order you do everything. Don’t worry, this isn’t one of those nerdish recipes that depends on things being infused for a week in the airing cupboard; nor is it inflexible. I’ve suggested cloves and cinnamon to spice it up; additionally or instead you could use cardamom; star anise; nutmeg.

Finally, make sure you chose a full bodied red wine. Something from somewhere that’s sunny as hell where they make wine full of life – Primitivo from Puglia; Shiraz from Australia or Pinotage from South Africa will all do perfectly. Don’t spend too much – more than £3 but less than a fiver should do the trick.

Before you start to make the mulled wine, zest the lemon and orange, then slice them into discs.

The secret ingredient in my mulled wine recipe is water. It saves the wine (or rather the alcohol in the wine) and also prevents the drink from being too ‘sticky.’ It’s about infusion rather than stewing. Add in the sugar, cloves, cinnamon sticks and the zest of orange and lemon to the water and heat. The longer the ingredients are allowed to infuse, the better – but the results will still be good even if you don’t have a lot of time.

When the water begins to boil and the pan is releasing all the pungent flavours, reduce the heat and let it simmer gently for at least ten minutes. Then take off the heat and add the wine and the slices of fruit.

Take the temperature back up, gradually and as soon it starts to steam; turn off the heat and serve. Remember, if steam is being produced, then alcohol is being evaporated.

There are hundreds of variations to making mulled wine, you could add a little Brandy or Port along with the wine in order to give the drink more bite or body. If you like mulled wine sweet you can add raisins; for more depth add blanched almonds. Alternatively, you could use the small tea bags you can get in your corner shop; or you could even shove some pot pouri into a muslin cloth. Depends if you want something drinkable or not. Whatever you do, don’t leave mulled wine boiling away in the pot.