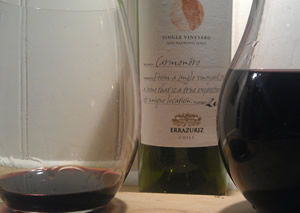 It's the weekend so up the ante this evening.  We've got guests staying so I'm opening tonight with a bottle of Taittinger Prelude NV Grand Cru… I'll post the consensus tasting note later!

Whilst waiting for the mob to return from central London I have opened the Single Vineyard Carmenère 2009.  The nose has attractive aromas of blackcurrant.  I've decanted it into a jug and poured myself a little sipster (or two) to get a gauge for it.  It needs a bit more time to breathe but I have to say the taste is lovely ripe black fruits with a good tannin structure.  I'd love to taste this in a few years when the age would allow for a greater development and integration of flavours.  Yum.. a really nice buy.  It costs £15 from Wimbledon Wine Cellars which is more than I'd spend on a week night but still is not as much as I'd pay in a bar or restaurant so.. what the heck?!

Tip for the night:  Push the boat out on weekends and toast the Titanic (I mean "economy")!