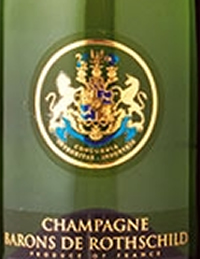 When a big name like Rothschild sticks itself on anything, it is hard not to look twice.  In China, I understand, a mere mention of the name will sell the associated product to the limits.  However, on Bond Street this evening at an event sponsored by many parties including Decanter, I stumbled upon Champagne Baron de Rothschild in Tiffany's.  To be straight talking, I am not a regular shopper at Tiffany's and as a matter of fact my debit card has never passed through their mits (I mean "midst"). Though, again, straight talking insists I mention the Paloma Picasso specialities were particularly beautiful!

Anyways, back to point in hand.  The Non-vintage Rothschild Champagne is a collaboration between the much vaunted claret houses of Mouton and Lafite. Yet myself and a punter I was talking to, both agreed it was pretty substandard hostile territory.  Gacky and sweet weird finish made it a no-no pour moi.

Tip here is:  Avoid in preference for something more authentic in its efforts than its brand.

Post script:  I haven't tried the vintage so don't want to darken that image - interested to hear views if anyone has them.