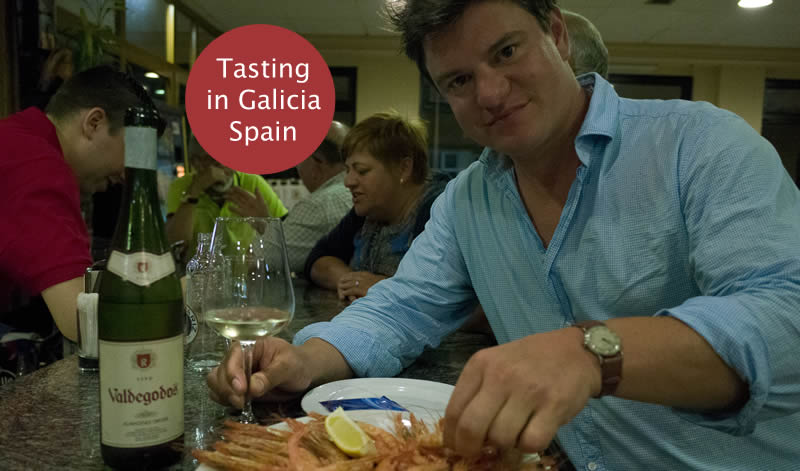 Ares is a small lazy town about 45 minutes from Santiago De Compostella by taxi. I have visited the town four times due to my friend having a family base there. That might be the first excuse. The successive visits were to revisit the landscape, the bars, the beaches and, most importantly, the people. 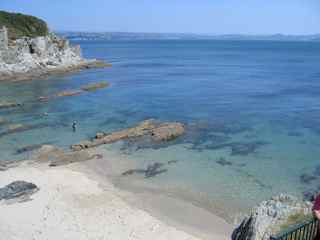 The coastline around Galicia, parked so poignantly at the top of Portugal and looking sideways to Asturias and onto the Basque country, is haphazard and fraught with nature. The eye takes it in as if it were Cornwall overdosing on steroids.  Ares itself is a sleepy town at first sight.  That first sight is definitely the rub!

The inhabitants only pretend to sleep. In fact they take their legendary sleepy reputation quite seriously.  The only thing is that I see very little evidence of it.  The town can be circumnavigated on foot in twenty minutes and the incumbents are largely retired folk.  They bustle around avoiding the rush of daylight and generally pretending to be closed no matter what trade they indulge in. However, come evening, they remove the dark glasses and stride to the nearest drinking establishment to meet the rest of their clan. The men are generally out first. 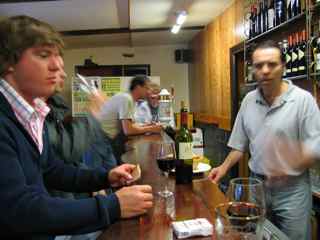 The bar that I always prefer to visit first is La Rueda. It is presided over by the fastidious and passionate wine man, “Peche” (I've no idea if this is how it is spelt but that is how it sounds). The bar has a narrow doorway, a small bar, minimum standing room and a ting television set cut into the wall (It was here on one of my early visit that I turned to see my good friend David Saxby making the Spanish news from Regents Park for staging 'The Chap Olympics'). Peche works with few tools but being the master craftsman he is, does exceptionally well enough to make this a bar I wished I found in every town I visited.  He has one beer pump, one leg of very good serrano jamon, a huge slab of Manchego cheese and a wonderful selection of Rioja's, Ribera del Duero, Albarino's amongst others on offer. One stands at the bar and chats, often completely unaware of what the other is saying, but happy in the circumstance that one finds oneself. Over 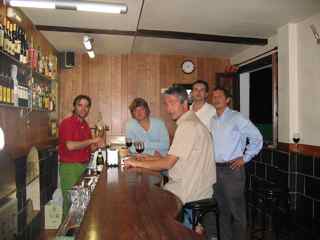 the last eight years I have visited and the welcome on return is warm and genuine. Peche reaches his hand out, waits for no orders but is only too pleased to spend his time very carefully and precisely cutting thin clippings of jamon for the plate.  He then servers the cheese.  We discuss the wines (with Ricardo interpreting) at length.  The conversation opens up to visitors from the town who stop in, often in a hurry to sink a social drinks, say hello to all, attempt to pay for all our drinks by means of hospitality, before vanishing again into the dimming evening light.

The house Rioja, as everywhere in Spain, is El Coto. A small finger point and shrug of the shoulders will result in the wonderful domestic switch to Cune crianza.  Then the request goes out for “qeso y jamon” and Peche goes to work with his razor knife, meticulously preparing the delicacy.  The deep carmin coloured cured ham glistens on the plate.  Wrapped around the manchego cheese, the rich flavours 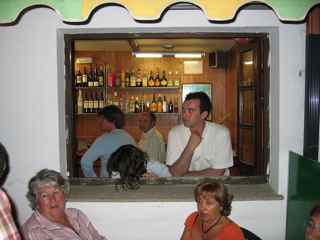 blend and fizzle on palate.  Just add wine for a sensation that will etch itself firmly on your memory.  This small ritual is so addictive we repeat over and over whilst balancing on the edge of our stools chatting quietly and soaking up the atmosphere.  The road outside is leading out of town and despite the immediate buildings, there is greenery and fresh air in abundance.  The scenery is also consistently hilly so wind blows and clouds can form and disperse with rapid regularity.  These are the characteristics that on a larger scale to the near south make up the three regions within the ever wonderful Rias Baixas.  The alborino wine that permeates Galicia and accompanies to perfection the seafood offered all over the coast, is one of the true jewels of the area.

One local from Ares who dropped into the La Rueda was the stout and tanned Jose Maria who, in his fifties, is bustling with energy, usually a bag of fresh Crustacea and mischief seeping through his armoury.  He informs us in a tone of incredulity that there is the biggest festival in Spain taking place just down the coast.  His incredulity stems from the fact that, although Ortigueira has not yet officially 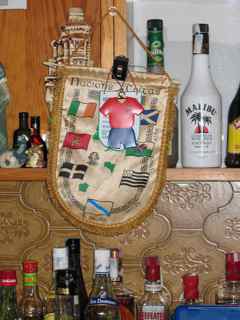 started, his son has been there for three days and has also been drunk and not slept for three days.  “What are we playing at?” he imparts, eyes bright and bulging.  “Why are we not there?”  This festival turned out to be an annual event celebrating everything Celtic. Thus the Gallego's, Asturian's, Basques, Scots, Welsh, Bretons and Cornish (sorry if I missed anyone... its been a long day!) gathered in a 150,000 strong crowd and took over this small town, Ortigueira, to party hard.  We supped our wine, chewed our ham and cheese whilst Jose Maria snuck behind us to the bar, demolished a beer, paid for our drinks and left shaking his head at our obvious mental slowness.  Several more visitors arrived and each boasted of their offspring being at the festival. They then refused to believe that the others child was in a worse state than their own.  It was inconceivable that they would be having a better time for each had been taught by the most accomplished hedonist in western Spain.  It was obvious to us that this festival must be sought and conquered.  Thus we switched to a bottle of alborino.  The one thing about alborino is the minerality and acidity that makes the mouth pop with pleasure and the phonetic sound of “mmmmmmm” emanate like a born reflex.

As the evening drew on we decided to leave Peche's bar and stroll onto the next – there are many – but this departure is always as symbolic as our arrival, for I know that in my leaving I have just concluded one of the small pleasure cycles within the trip that in itself contains numerous.