A couple of weeks ago I was in Galicia, NW Spain for five days on a mission to inhale, imbibe, ingest and invoke as much Bacchic revery as can be managed from such a trip. I can say without a hint of doubt that we achieved our objective!

Galicia sits on the top left hand corner of Spain, directly above Portugal. With Santiago de Compostella lending the region centuries of status amongst religious pilgrims. However, more recently, the wines of the region have been worked into wonders of titivating indulgence that pair superbly well with the local food dishes.

From Galicia, crossing through Asturias, to the Basque country, the food most famous is the seafood. The freshness of the octopus (pulpo), or the salted whole grilled prawns (gambas a la plancha) are two great specialties of Galicia. When they are served with the local wines such as Ribera or Alborino, they strike the perfect chord. 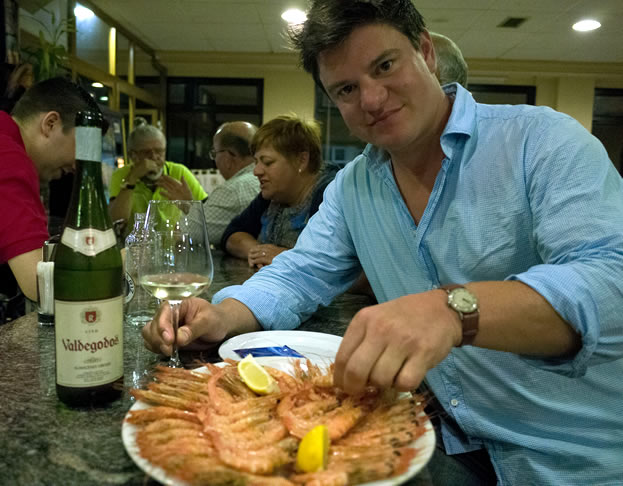 The first of the wines mentioned above, Ribera, is soft, dry and fruity and often served in white porcelain bowls. I was walking along with my friend, Richard, when we decided to pull of the street and get some tapas, to alleviate the emerging pangs of hunger. We ordered a plate of gambas a la plancha and, almost daringly, a bottle of ribera for €6 (about £5GBP or $8USD). Considering the total cost of the tapas and wine came to about €15, the colossal size of the plate of prawns nearly knocked us sideways. The bottle of wine was also delicious. We crunched our way through this marathon of delight, washing down a huge number of critters with the ribera wine. At the end we sat quietly and contentedly for a few minutes to appreciate the moment.

Wondering further around the streets of the little gem of a town called Ares, about 30 minutes drive from La Coruna, we stumbled into one of our favourite haunts, La Roda, where the owner, Peci, is a connoisseur of wines from the region. We immediately ordered a bottle of tinto made from mencia grapes. This is a very young, purple in colour, wine with a high scented perfume. It is best served ever so slightly chilled to allow the light red fruit flavours to release for full appreciation. Peci also offers two food types: “jamon y qeso” or “ham and cheese”. The Serrano ham is carefully sliced from the pig leg turned ungraciously upward on the stand, and the famous Manchego cheese is cut into small slices that can be eaten with small wooden sticks. The combination is another joy to beheld. We stand around at the bar chatting and signing to locals. On the third night here, my friend, Daryl, brought his guitar in and played a set of songs to a very appreciative crowd of locals. The sound of acoustic guitar, laughter, pouring wine and clinking glasses setting the pace of evening life. 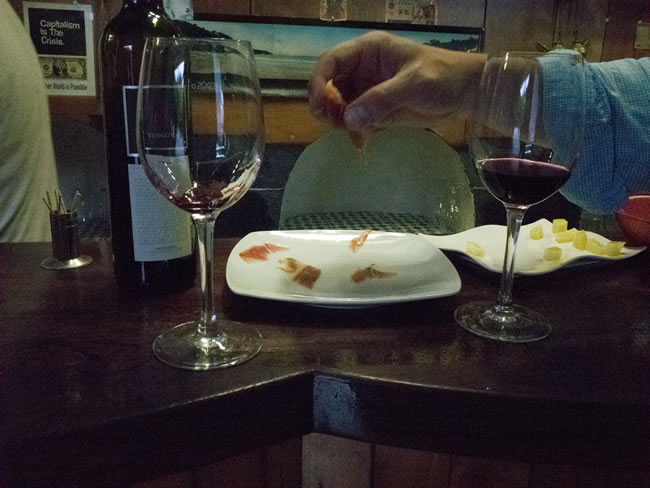 One thing to realise in Galicia is that the older folk go to bed much later than the youngsters. The youngsters do party for days during fiestas but the elders are consistently out late, drifting from bar to bar. Later in the evening after La Roda, at around 1am, we thought we had outstayed the elders, advising a stray that they had all gone home. Within minutes we were proven wrong when the sounds of Spanish love songs drifted round the corner, couched in laughter and the lingering heat radiating from the buildings.

The next morning we awoke and were shuffled out to the car to be taken to the festival of Carmen in the next small town of Mugados. The mere mention of this town fills me with expectation. The waterfront in Mugados is lined with ordinary looking little bars that face of the quay towards the the far side of the rias (the rias are large rivers that flow through large valleys out to the sea but are a defining part of the landscape in this part of Spain) that is calmly enclosed before opening out to the rolling Atlantic ocean. 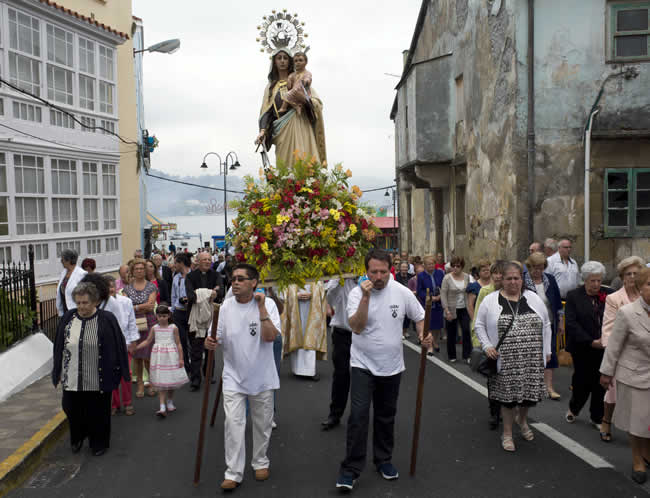 It was around noon when we arrived and the festival hadn’t yet started. We walked along the front and ordered a small cup of Estrella beer and were given a small tapa of empanada, a local version of a pie, not dissimilar to a Cornish pasty. The tempo of the place seemed to turn on a Euro coin, as people rapidly poured in and the buzz became infectious. Musicians were walking up and down with brass instruments, the bars were filling. Luisa, my friend, Richard’s mother suggested we find somewhere to eat and so we quickly found ourselves seated on stools with small porcelain cups of ribera and a large plate of pulpo a la Gallega (Octopus in the Galician style), which is cooked in olive oil with paprika. It is a little spicey, addictive, sumptuous and morish. We had a second plate straight after and a few jugs of ribera. 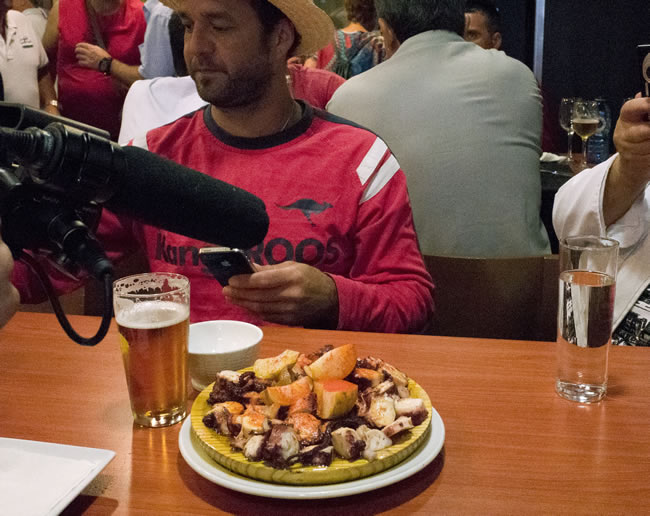 After this mini-feast we headed back out to see the Madonna being carried from the boat and in a procession through the town accompanied by a priest, choral singers and musicians, as well as towns people enthralled by the spectacle.

We drove carefully back to Ares and stopped at the top of the high point where there was an old ruined prison and a monastery. From here we could see out over the ship building city of Ferrol. We also learned that day that the port was to be closed as part of the austerity measures that are hurting the people of Spain so much these days. As many as 80,000 jobs will be lost, making a difficult situation much more difficult. We can only hope that new opportunities and initiatives come to the area to start creating a new wave of productive jobs for the people.

Back in Ares we had a relaxing siesta before heading out to a new restaurant behind the church. The alborino here was delicious. We also ordered one of my favourite tapas dishes, the peppers of Padron. Padron is a small town in Galicia that produces these green peppers that are known for surprising us with about 1 in 6 that are hot, whilst the other 5 are mild. They are cooked in a pan with olive oil and served with rock salt. Lovely flavours that mingle with the wine and chat; another component of pleasure! 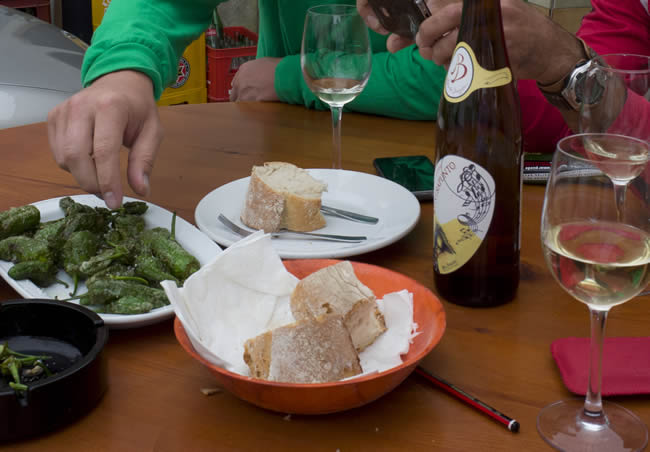 It transpired that Luisa had omitted to tell us that it was her birthday. We extended the meal to include chipirones fritos (fried baby squids), some jamon, some rioja wine, cooked chorizo sausage and a host of other fantastic dishes. As the evening crept on, the sun receded and we roamed the promenade (known as el paseo) stopping for a small glass of wine or a refreshing cana (tiny beer) wherever the opportunity allowed.

The sun shone down on us nearly the whole trip. The Monday was our final full day so we hired some kayaks, setting the small neighbouring village of Redes in our sights. Paddling out across the still water was dreamy and the land surrounding us was all so still. At the end of the headland (still calm as we were inside another rias that was not facing the Atlantic), we passed through a narrow gap between the rocks and headed out to inspect the muscle farms where the sea appeared crammed full of shoals of sea bass basking in the nutrient rich water. Rounding the next corner we caught sight of the destination and paddled in, landing our vessels on the slipway. Redes is beautifully tranquil with very little stirring. The houses are all quaint, and there is a cosy bar in the heart of the village offering alfresco tables sloping down the slipway. A small beach rests on the left that was created from sand transported from Ares. 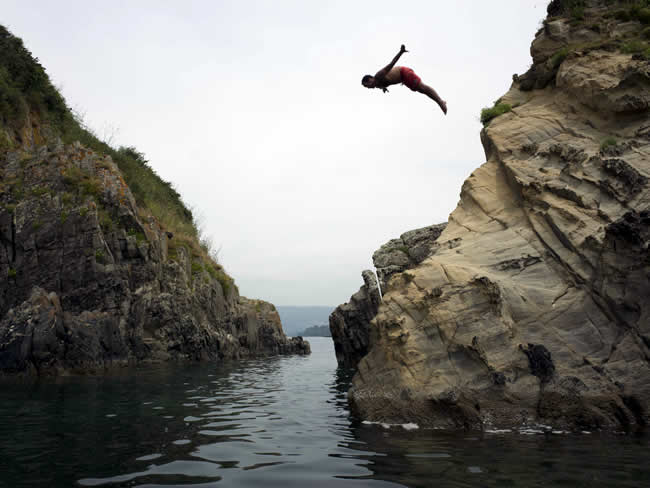 We sat out and had a lovely little tapa of chorizo and a glass of coke. On the paddle back, my friend daryl climbed to the top of the rock that had broken from the headland, swan diving some 4 or 5 metres into the deep water. He needed the refreshing wake up as he was due to play with the local bar owner, Juan, this evening at a place we frequent called ‘El Belmol’. Juan speaks English with a heavy Parisian accent and is a very talented musician. It was a lovely evening watching Juan and Daryl play many songs in both Spanish and English, with our elder friends from the town singing harmoniously, as the sun dropped for the last time behind the church. 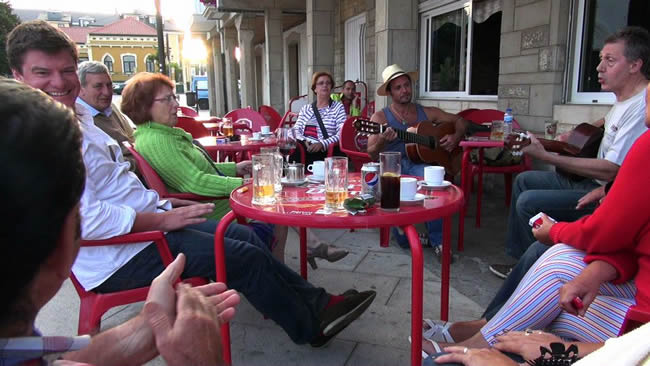 One cannot help but enjoy this part of Spain, famous amongst those who go there for many things, from the food, the wine, the landscape and, of course, the people. I expect I’ll be returning to take it all in again; a fabulous tapestry that interlocks in the mind and expresses itself across the senses, all within the cycle of the setting sun.