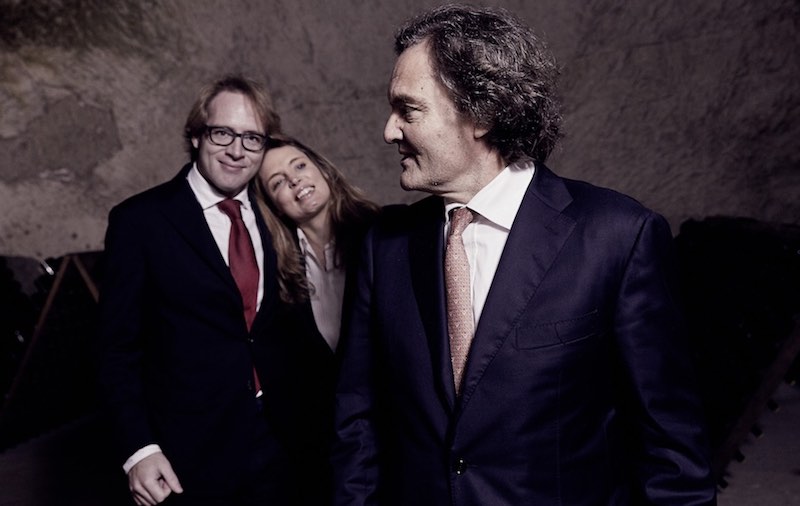 Despite being a global brand producing 6.5million bottles annually and shipping to 149 countries, the Taittinger family remain familiar and personable faces to the wine, culinary and art fraternities in the UK and beyond. Thus it is a point of interest when the hugely charismatic Pierre-Emmanuel decides to hand over the reins.

According to the timeline he established from the moment he took back control of Taittinger Champagne in 2006, Pierre-Emmanuel Taittinger has made the decision to entrust the future of the family business to the next generation.

Speaking of his own time in the Champagne business Pierre-Emmanuel says:

“I have dedicated more than 45 years of my life to Champagne and the House that bears our name and our history.  These last thirteen years have undoubtedly been the most effervescent, the most exhilarating of my career at Taittinger… I can hand over the reins, secure in a sense of accomplishment: a passionate team in whom I have complete confidence, very fine wines, a large and growing number of fans of our brand in more than 140 countries around the world. Taittinger holds a genuine potential for development and now more than ever reflects the authenticity and excellence of our culture and heritage.”

Vitalie Taittinger will become President of Taittinger Champagne as successor to her father whose term of office will end on 31st December 2019. Aged 40, she has been working for the House for 12 years and is currently the Director of Marketing and Communication. She will undertake her new responsibilities with the support of Damien le Sueur (General Manager) and her brother Clovis Taittinger (who will be promoted to General Manager), the current Management Committee and all House employees.

Speaking of her father, Vitalie says: “We owe him the independence so fundamental to the identity of our House. Thanks to him and to the work of all concerned, Taittinger has grown considerably with an ever-increasing attention to the quality of our wines, the preservation of our environment, the respect of our partners and our customers... with always this touch of impertinence and audacity, just like the one that led us to go and plant vines at Domaine Evremond in Kent!”

Champagne Taittinger was among the first Champagne brands to embark upon establishing vineyards in England following the success of many other emergent labels. Despite a more northerly latitude that previously prevented British growers from properly ripening grape varieties like Chardonnay and Pinot Noir, climate change is seeing temperatures rise and growing periods lengthen. Although Britain’s wine production is tiny compared to Champagne, with suitable land costing mere fractions of the established premier and grand cru vineyards in France, England is easily seen as a good hedge against warming in more traditional locations.

Despite this, climate change has so far been good for the Champagne region with more consistency of quality and yields. It is fair to say that this is a golden age of Champagne production.

With many of Taittinger’s Champagnes being matured in their magnificent UNESCO status, 4th-century Roman cellars, the hallmark of these wines is the high percentage of Chardonnay used, which gives them elegance, delicacy and finesse.

As part of his ongoing commitment alongside Pierre-Emmanuel Taittinger, Damien le Sueur will work with Vitalie and Clovis as a control tower, ensuring coordination between vineyards, supplies, and production, business and finance departments. Clovis Taittinger will be in charge of the sales and marketing department.

Today, Taittinger Champagne is an independent company, endowed with a beautiful spirit and a vineyard of 288 hectares certified Sustainable Viticulture in Champagne and HVE (High Environmental Value). With the recent overhauling of its production system, the company can look to the future with quiet confidence. Its Gallo-Roman chalk quarries are listed under UNESCO world heritage “Champagne Hillsides, Houses and Cellars”.

Vitalie concludes saying, “With the support of Damien le Sueur, my brother Clovis and all our teams, we will carry on down this path. I am honoured by the trust placed in me and my wish is to see our House shine every day, for our employees, customers and partners.”