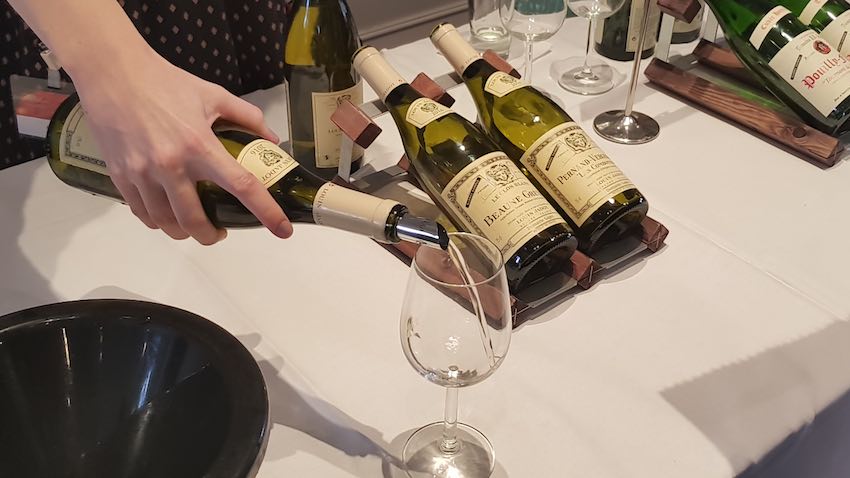 If you get the chance to try 18 whites and 32 reds from the same region, the same year and the same producer, you should not let it pass. With prices from £17 to £250 per bottle, this is Burgundy, not bargain supermarket wine, but many of them do represent excellent value for money.  Some of the most pleasing wines were the £17 Beaujolais. BRENDAN BARRATT reports. 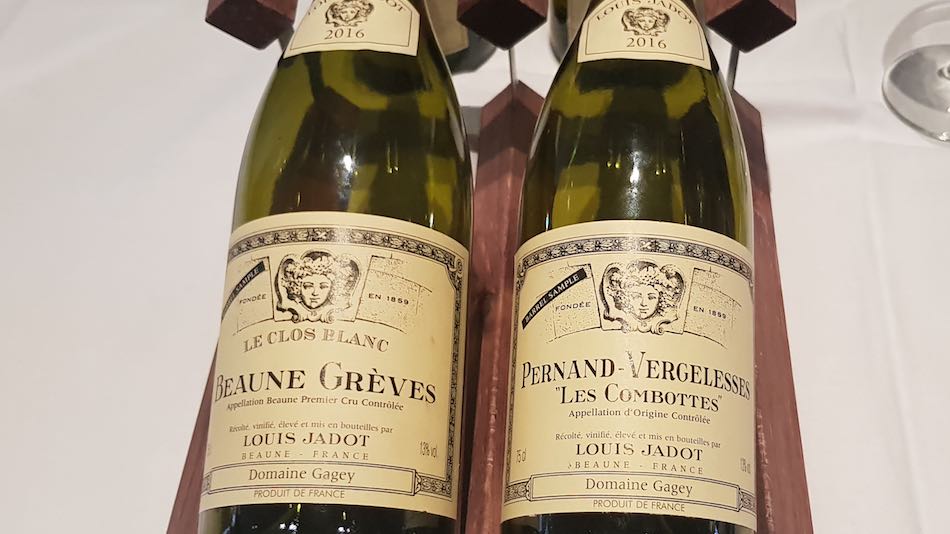 The Pernard Vergelesses Les Combottes was a great young wine, and is great value.  It grows a few hundred meters from the Grand Cru Corton Charlemagne, but does not find its way to the UK too often. I have heard the same story from a number of different wine merchants on why the wines from this village are so cheap. They say that the name puts people off because they can’t pronounce it. Showing off good wine to your friends is not so much fun if you can’t pronounce the name.  My advice? Sniff the air and pronounce it any way you want and enjoy a great white burgundy for £25.

We were told that the whites were not looking great as a result of a late malolactic fermentation. The few problems I saw in the whites were not an overabundance of acidity, or turbidity or unpleasant gasses. For me, some of the more expensive whites seemed unbalanced, without the powerful nose I would have expected. The Puligny Referts was a great wine, with mouth-filling power, and perfume and balance. Unfortunately there is none available for sale as all allocations will be taken up. It makes sense.

The fact that there were some great white wines and that the winemaking process is essentially the same, except for some slight oak ageing differences, is a good example of the great Burgundian adage that the wine is made in the vineyard!

Jadot, is one of the biggest producers in Burgundy. They make wine from 270 hectares in Burgundy while most producers make wine from 5-10 hectares.  You don’t get that by owning and operating all of your own vineyards. It is common for producers to rent vineyards and do all the work, to buy fruit grown by someone else, to buy juice that has been grown and processed by someone else, and even to buy wine. I suspect that some of the inconsistencies are the results of different processes in the vineyards.

As for the wines: 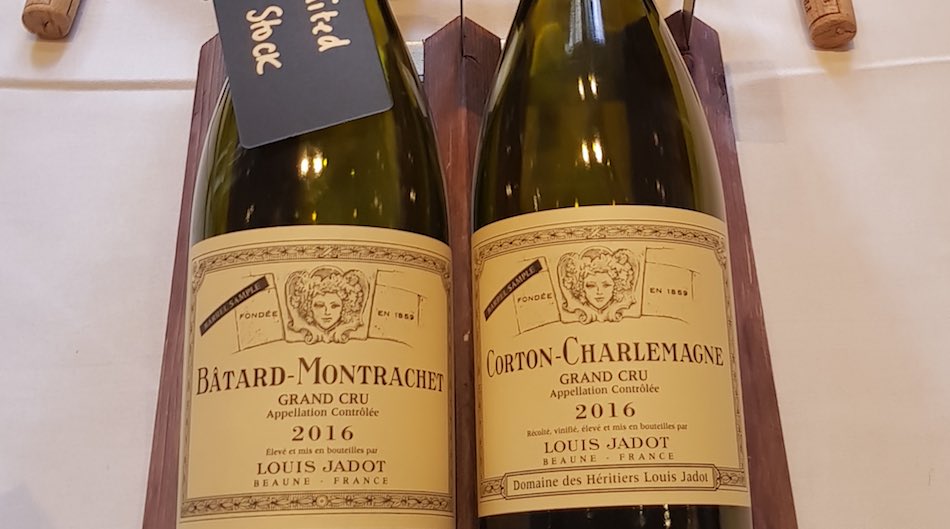 The Chassagne Morgeot was impressive with a lean, typically Chassagne nose, very good length, and a balanced palate.  At more than £50 per bottle, It is expensive by most people’s standards, but it is a fair price.

The Batard Montrachet had a slightly honeyed nose, but lacked a front/mid palate.  There was not a great deal of perfume on the nose but it did provide exceptional good power and length in the mouth.  I preferred the Corton Charlemagne, and that is not something I say often.  It has a great nose, lean, balanced, and much better value than the Batard.

Most of the top reds were impressive, but a stand-out performer was the Estournelles Saint Jaques, my favourite of the tasting and shows that a good premier cru wine can be a bargain when up against the ‘lesser’ Grand Cru of Clos Vougeot.

The Volnay’s were good, consistent and a fine example of decent Burgundy with complex perfume, plenty of tannin and good acidity that will reward keeping for a long time. There was a very fine Pommard, that surprised me as it was not overly tannic.

The Beaune reds were a good example of Beaune, with a lean palate and reasonably good perfume, but not really Premier Cru quality. There are lot of good, cheaper village wines out there for the same price.

For fun, Jadot showed four 2011’s (one of which was extremely pleasing!) 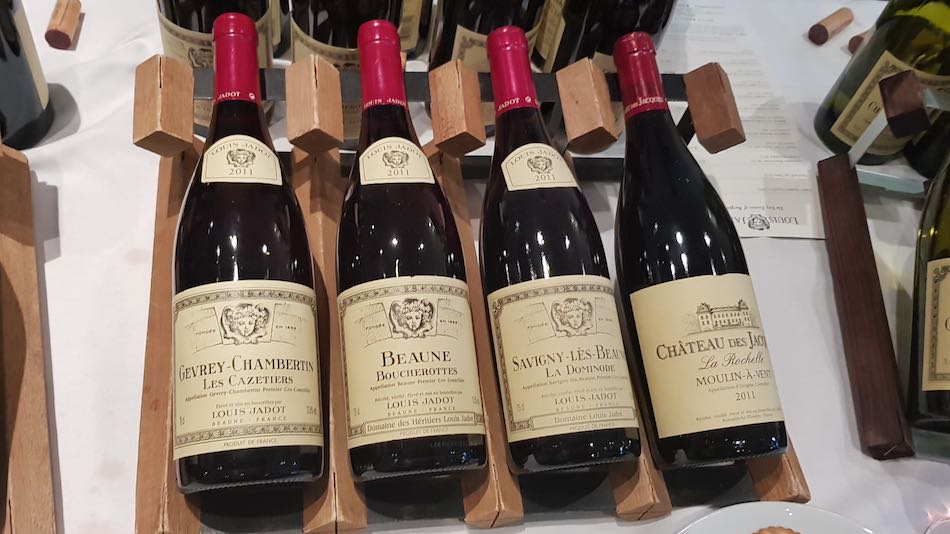 A Moulin a Vent, Savigny red, Beaune Boucherottes and a Gevrey Chambertin Cazetiers.

2011 was a difficult year, with a lot of sorting to get rid of rotten grapes, but they always showed really well in the bottle and have been appealing ever since.  The Moulin a Vent was great.  Even more reason to buy the 2016s.  The Gevrey Chambertin Cazetiers was a reminder of what I didn’t like about older versions of Jadot wines.  It was good, but had a hardness to the palate that was unpleasant.  There was a charred oak taste still apparent and this is what I have not seen in any of the 2016 wines.

When you put these wines in a global context, they may be more expensive than the Chardonnay from the USA or the Pinot Noir from New Zealand, but they are in a different league.  The complexity of the nose, the length, the balance and the age-ability of these wines have only been matched by a handful of producers outside of Burgundy, and for those, you will pay far more and get far less than you will with these wines.

I have never been a great fan of the Jadot wines in the past, however, this tasting changed my mind. My main objection was a lack of value for money, as the wines were not always perfect, but they were charging premium prices compared to smaller producers that were doing it better.

While we may still be paying for the brand, the 2016’s were clean, consistent and a step up in quality. Perhaps it was the new winemaker who arrived in 2012, or the introduction of sorting tables, or maybe both but whatever the reason, these are wines that are definitely worth trying, buying and seeing how they age.

Brendan Barratt was first introduced to Burgundy working for Australia's greatest pinot noir producer in Gippsland, Victoria, Australia. He has vineyards in Gippsland, studied winemaking in Beaune, and has been making wine in both Burgundy and Australia for more than 15 years.