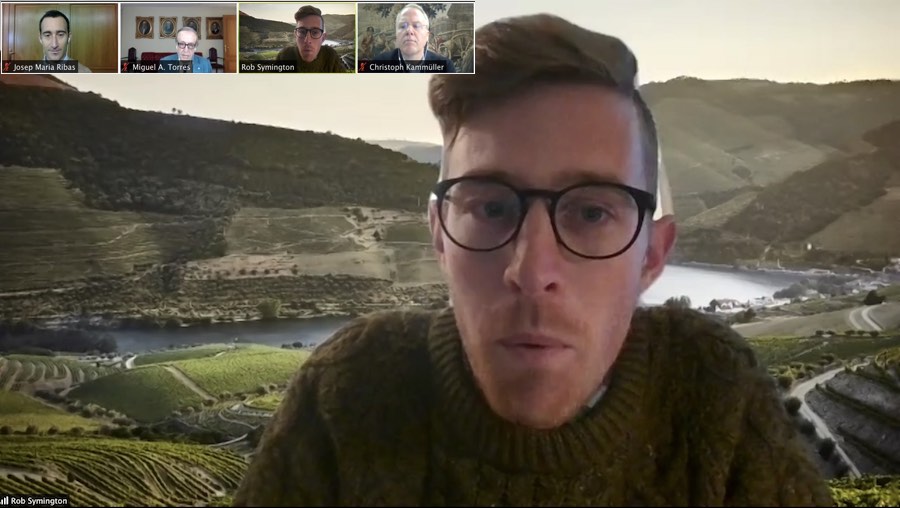 A group of wine producers including Torres, Symington and Jackson Family Estates have coordinated efforts to combat climate change under the banner of the International Wineries For Climate Action (IWCA), encouraging others to follow their lead and join the group committed to emissions reduction.

Our current perspective on the year 2020 is likely to be shaped by the Coronavirus but for many it will also be the year that life-threatening climate change entered their lives.

There have been a record number of powerful named tropical storms and hurricanes this year striking many different areas of the world and shattering global records. These have struck multiple times in the Americas, Asia and even Europe.

The west coast of America has been subject to biblical scale wildfires made worse by the tinder box conditions of a multiyear drought.

Across the world, lives have been lost and livelihoods devastated.

We know that 50% of the total global greenhouse gas (GHG's) emissions, which currently exceed 50 billion tonnes, come from the 10% wealthiest of people, a percentage that includes many of us wine drinkers.

Carbon emissions are woven into the fabric of life that has flourished since the beginning of the industrial revolution and we now have very limited time to unpick the carbon, not just becoming CO2 neutral but to go further.

The worlds poorest, although much greater in number, are not responsible for the greater atmospheric burden of destructive carbon pollution. They are, however, often the most vulnerable to the extreme ire of the climate system when it rages against them.

The COVID-19 pandemic has created a false narrative in some quarters that a global lockdown has benefited the environment. With the grounding of much aviation and reduction in overall transport, we could think that the atmosphere is getting a much-needed breather.

Unfortunately, this is not true. Overall the reduction was calculated at 8.8% in GHG emissions in the first half of 2020 compared to 2019. That means there is still much more than 40 billion tonnes of carbon from human sources being emitted, even in a year when many of us are locked down at home with nowhere to go.

Another complexity is in the reduction of aerosols that, although are bad for human health, act as a cooling layer in the atmosphere, much like a mask. These have a short life of a few days before they fall out of the sky. With this reflective layer of particulates missing temperatures have edged higher, especially over Asia where the source was greatest.

Whether this has contributed to the increased Arctic melting is not yet known for sure but scientists also ominously declared that the winter sea ice in the Siberian Laptev Sea, where the ice normally begins its freezing for winter, has failed to re-form.

The Arctic plays an important role as the regulator of weather in the northern hemisphere. The lack of summer sea-ice from ongoing warming is having a destabilising effect on the jet stream which in turn has a destabilising impact on the reliability of seasonal weather for agriculture. Such vulnerabilities can lead to crop failures and even conflict.

With the size and complexity of the problem that we are collectively faced with, it is obviously incumbent upon all of us to do what we can, in every facet of every industry, to reduce our consumption and greenhouse gas emissions.

Judging by the climate reading list in Miguel Torres’s presentation slide, he is acutely aware of all of this. 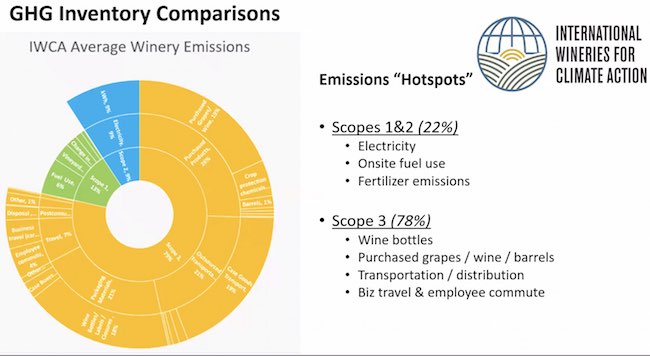 This group of ambitious wine producers are now calling on other like-minded wineries who are prepared to take steps to quantify their emissions footprint and start the journey towards reducing their impact on the environment to become sustainable.

To join the IWCA the producer needs to be able to prove that 20% of on-site energy is powered by renewables. In addition, they must have completed an independently verified GHG emissions inventory.

Then within 5 years, the winery must prove they have reduced their emissions by 25% to become full members.

Speaking on the call was Rob Symington of the Portuguese port wine family estates. Rob made it clear that joining his family business held a requisite that the climate issue must be tackled seriously.

Producing wine in the already extreme conditions of the Douro Valley mean that the predicted rises in temperature require work to be done to ensure resilience in the vineyard, on top of the wider issue of emissions reduction.

Rob also raised the spectre of the temptation for greenwashing, when companies see climate and environmental issues as being more to do with reputation and messaging than actual real action. Hence the stringent demands for independent, external auditing to preserve transparency.

Many wine businesses, large and small, are family businesses with decision-making processes that can span generations. It makes perfect sense for wine producers to take the warning of scientists seriously when they state that the action we take this decade will impact the climate for thousands of years.

What about smaller producers?

An obvious point to make is that it can be much easier to take drastic steps in the direction of sustainability when you are a large established wine producer with cash in the bank. This is exacerbated by the enormous pressures many smaller businesses are under due to the pandemic.

Josep Maria Ribas who spoke on behalf of the IWSA said that talks were in place with Lloyds, who they have used for their GHG audits, to be able to reduce the costs down for the group, thus making it easier for smaller producers to participate. He also spoke of changing quotas for required actions based on the size of production to help smaller wineries come on board.

No doubt many more initiatives toward inclusion will have to be created in order to make this an industry-wide movement.

The idea of complex systems interacting with often stubborn cultural norms was mentioned by Rob Symington. Change has often proved slow in the past but the incoming generation of consumers are questioning the world around them and rejecting many norms that they see as unsustainable. It is often the older generation who are struggling the most to accept the needed changes to secure their future.

In 2021 the UK will host the next global climate change meeting, the UN Conference Of The Parties, COP26, in Glasgow. This will be the next most important conference since the signing of the Paris Agreement and will aim to see the global ambition to reduce emissions ratcheted up to stay within worldwide survivable boundaries set out by the Intergovernmental Panel on Climate Change (IPCC).

With President-Elect Biden looking to sweep into the White House with a very ambitious climate policy agenda, the growing momentum towards Glasgow in November will mean public literacy and interest in climate change is set to drastically improve.

The positioning of the IWCA at this moment might appear untimely in the midst of the pandemic but as we start to move past the worst of the Coronavirus, it is likely to retrospectively appear very timely indeed. Wineries who join and take up the challenge will have a very coherent story to share with their customers.