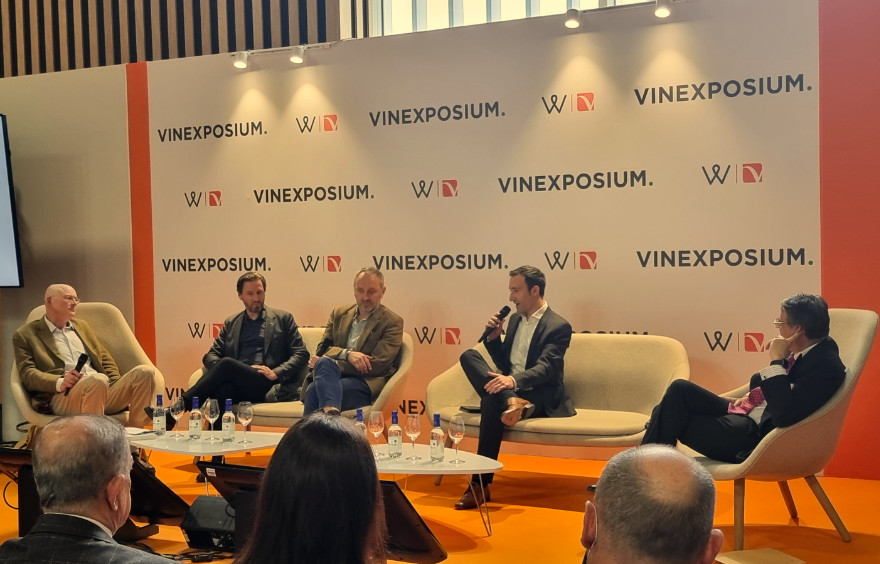 VinExpo and THE Climate Event: ‘Making Wine In A Changing Climate’

Climate change is on the agenda and great things are being done but are we gearing up for change or just freewheeling into an uncertain and highly variable future? These are my notes and reflections from attending the ‘Making Wine In A Changing Climate’ event.

One immediate observation was the gender disconnect on the panel. Walking around the halls at VinExpo it was hard not to notice the presence of women in wine. In Bordeaux, in the Rhone and other regions, whole areas were given over to women in wine.

It is not a gesture of political correctness but more specifically, gender is really the story behind climate change and consumption. Creating panels with at least a bit of balance does signal to the audience that ‘we understand that’. This is as much a note to self as it is a criticism of the event.

Perhaps the title of the session did hint at a more general discourse but lapsing into discussions around pending climate disasters that will wake up the masses is probably not a good use of time.

Following this with statements about how we frame our narrative on climate to avoid losing hope is, in my view, another waste of valuable time. The audience is here for pragmatism and informative discussion. Rupert Joy did a good job steering the conversation back towards the subject title.

The best contributions for me came from Stephen Cronk of Mirabeau en Provence and The Regenerative Viticulture Foundation. Richard is a relatively new winemaker who is telling his climate story in the context of bringing the soils back to life with regenerative techniques.

Soil health is critically important but also extremely pragmatic. The carbon sink element is a by-product of the process that stimulates life and builds resilience against the warming trend and other extremes.

Josep Maria Ribas Portella from Familia Torres highlighted how Torres are invested in regenerative approaches  (they have also issued several press releases in the last year or two highlighting their progress).

This was one part of the discussion that really resonated for me because it showed the big and the small wine producers side by side approaching the challenge in the same way and declaring on the stage that they are now going to be speaking more in order to exchange knowledge.

From my own recent work interviewing producers in Alentejo, what was said again and again is that wine estates are thinking less as competitors and more like collaborators. Coming together to give demonstrations on techniques that have helped them deal with climate extremes.

Back at VinExpo this event is highlighting the efforts of the ‘International Wineries for Climate Action’ who are mounting a global effort to transform the industry. In the room as well, were Marta Mendonca and Cristina Crava from the Porto Protocol who have a long-established community of winemakers and industry professionals who regularly discuss issues across the sector in relation to climate change.

So the momentum for building a knowledge base that is itself a tool for resilience is growing. The trouble is, the wineries in the halls here are pedaling at their stands concentrating on the economic pillar of sustainability and not so inclined to be distracted.

Perhaps a show like VinExpo could partner with these organisations and deliver a print/pdf climate briefing document to the stand at the beginning of the conference to be read when the aisles are quiet?

Despite this, just walking around and speaking to producers, so many of them have climate and environmental stories woven into their business experience. Ironically, quite a few are good news stories so they don’t focus on the heaviness around the subject. In fact, the attitude is more carpe diem, or make wine while the sunshines!

Focus on the pragmatic

This kind of brings us back to the story around soils, regenerative practices and carbon. How can the wine industry collectively support initiatives like the establishment of verifying carbon sequestration that can be used for revenue generation by selling the carbon credits to fund ongoing sustainability work?

These estates that sit on the frontlines of climate and who are now trying to move away from monoculture farming by stimulating biodiversity, managing forests and much more, are providing both an example to other agricultural sectors but also a very valuable service locking up carbon.

The main point is that with one hour to discuss, making the content pragmatic should be a critical objective. Discussions around disasters, doom or dodgy climate models can be had in the bar.

Pau Roca Blasco, DG of the IOV mentioned their climate dashboard tool that IOV is launching and that there was a collaboration with Copernicus (Europe’s Earth Observation Programme) but alas did not know enough about it to elaborate. Again, perhaps asking the person in the organisation who is actually developing it to come and provide a short demo would stimulate interest beyond a vague reference?

One member of the audience asked if we should stop using the term ‘mitigation’ and start only using ‘adaptation’. Despite the misunderstanding of the terms, this is a valuable example of how messages are getting through to those with whom we wish to communicate.

Everyone knows what a disaster and a catastrophe is. They can also read concern and panic in a facial expression but ask them to mitigate their emissions and they’ll probably just guess you are a climate person and file it under ‘later’.

Articulation is key to assimilation and these discussions are valuable because everybody learns something, whether it is to love the soil or to use plain language. We now know the public cares about the environment and is worried about climate change. The climate story in wine is still being written but what is the magic ingredient to thicken the plot?

More information about the International Wineries For Climate Action (IWCA)

More information about the Porto Protocol

Coming next: Interview with Frédéric Chaudiére, President of the Ventoux AOC - a region having its day in the sun!