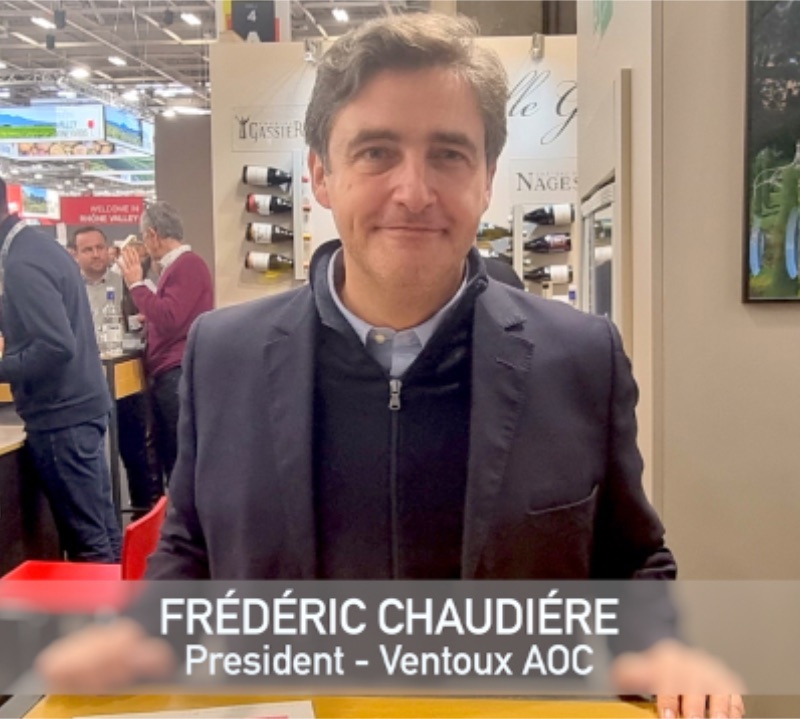 Ventoux AOC - Is this high altitude Rhone appellation having it's day in the sun?

A few years ago in London, I met James King from Chateau Unang in the Ventoux AOC in the Rhone. This is an area of the Rhone that is currently enjoying an ascending reputation due to a warming climate, better ripening while maintaining acidity.

Recently at VinExpo, Paris, I met with James's wife, Joanna King, who then introduced me to Frederic Chaudiére, President of the Ventoux Appellation. In this short interview with Frederic, we discuss the climate imprint so far and also the efforts that are now underway to join global efforts to reduce carbon emissions.

Frédéric Chaudiére: So the DNA of our terroir is very much linked to our mountain, and that mountain creates a kind of cooler climate all around the AOC.

The mountain is about 2000 meters high and around it there are a lot of topography and we are half an hour East of Châteauneuf-du-Pape, but much higher up and the influence of the mountain really gives very cool nights and very warm days and it is the difference of temperatures that creates this unique climate that defines Ventoux.

For a long time that climate was a bit challenging in terms of getting maturity, especially in the 70’s or the 80’s but with climate change we have really seen on the contrary, we have kept the good acidity that was the second nature of AOC - and this is something that many of our neighbours are losing now. Of course, we don’t have problems any more to reach maturity. It’s a done thing, but the balance with acidity and maturity has never been better than now.

And because climate is so defining of our terroir it’s also become a priority in a way we define ourselves and try to project ourselves. So, we have done some climate studies Inrae which is a scientific French institution that really focuses on agronomic and environmental research, and to see where we will go in the next 20/30/50 years.

We feel we are very blessed to be in this position because despite climate change we will still be able to adapt and make wine for the next decades.

Nick Breeze:  And looking at this map, you are sort of just slightly North but to the East of the Châteauneuf-du-Pape and you mentioned that they are having more of the time dealing with the heat and the warmth.

I suppose it makes it more challenging for Châteauneuf-du-Pape but the thing that is sure for us is that it provides the balance that I was telling you about before, for them is more difficult to have.

NB: Ok, so you are seeing more consistency in the [grapes] ripening and development.

FC: The only downside we have seen in 2017 and on this vintage is the fact that we have now frosts that can happen at the moment when the vines have already started and you know, when the 30 years ago the vines would not have started their cycle, so this episode of frost can be quite deadly to us.

NB: Have you got any methods or interventions that might be more resilient to this frost because that is quite common problem these days?

FC: It is very difficult, if you think about what happened to 2021, it went down to minus -8 to -9ºC, and the frost started like around midnight or one in the morning and we had negative temperatures for like 7 or 8 hours. It is very difficult to fight.

The best way would be to prune at the latest possible time and so that the vines would be protected.

We had a chance to have a few plots. Usually the plots that are in the parts that can actually be exposed to frost are the last one we prune. But it is impossible, unfortunately, to prune all the    AOC so late that it will be protected. We don’t have a real solution against the frost I think. There is no magic wand.

NB: In terms of sustainability which is a buzzword wherever you go in this exhibition, whats the attitude or the movement in Ventoux looking like?

FC: Well, we started more than a year ago, a big consultation of all our growers and we were very happy to have more than 200 answers coming back from co-operators, independent wineries and so we have gathered lots of ideas from this process.

Then we structured all these ideas, had a second consultation in May 2021, which then gave us, kind of help us to kind of highlight a plan and 3 main the directions where we want to go as a collective, to really become an exemplary AOC.

So basically we have been the first AOC to do it with purpose, in French we say reason d’être. We have given birth to this nine main actions that we want to follow in the next years. The 3 main directions are: 1, protection of the living, the 2nd is the reduction of our impact and also the 3rd one is sharing and cultivating more of the local life, being more part of the attractiveness of our territory.

Among all this basically, we want, one of the main objectives is to reduce by 30% our carbon footprint. The main 2 tools we will have for that, will be: first we want to triple the cover crop in the vines of the AOC.

A first participative event that gathered about 80 producers, searchers, and institutions of the AOC to think about cover crops in the AOC, which varieties would be more adaptive, when to make it, which kind of machine, really launch a collective reflection about it. This is going to be one of the mainstays of the actions of the very near future.

The second thing we are working on … is to make sure that we really use re-use our bottles. The bottle itself represents about 40% of the carbon footprint in Ventoux, as in many other AOC’s. We are starting to gather and create a network of wineries that will hopefully be able to gather some bottles, have them washed and have a discussion with a firm that is based in Avignon, and then re-deliver the bottle. That we can start that kind of virtual cycle

These are among the main actions we are holding right now. There is a history of the Ventoux mountain that is dear to many of us. We wouldn’t think now when we come to the area of AOC because there is 30,000 hectares of forest, but in the middle of the 19th century the mountain was kind of just a whole rock, there were no trees anymore.

Some amazing re-forestation initiatives were launched at the end of the 19th century, so we also want to do a little share of that and keep on planting, the objective is to plant 30,000 trees by the end of 2030.

NB: So, you are getting into regenerative processes, bringing back to what was there. Fantastic, so, I mean it is never as easy as flipping the switch to where you need to be. There is always a journey for learning. So the Ventoux is on the journey.

FC: Yes, we have started walking!

NB: How will you start communicating what you are doing to the outside world? To the consumers, to the drinkers?

FC: Well, I think we want to really communicate by the proofs of our actions. Our idea is now quite straightforward. We announced our objectives but we will really launch our communication when we can show the first results of these objectives.

So we are trying to shape that kind of calendar of cover crop, of re-using the bottles, planting trees. We will communicate once we are able to do that.

NB: So you are using, in that proof element, auditing processes, outside independent analyses, that kind of stuff?

NB: Just to end on then, if you LOOK forward to the rest of this decade, you know I cover a lot of climate change stuff, everyone says this is the ultimate decade, if we don’t do it now we are stuffed. What is the positive, the optimist in you that is looking forward to this decade, and thinking, yeah, you know we got a good shot at doing all this stuff?

FC: Well, I mean, I told you about our plan to reduce our footprint but beyond these objectives and these actions, the dearest objective we are carrying is to create a stronger collective and to federate more all the different wineries of the AOC.

We feel there is a great dynamic already in that direction. You know, you have met other growers in the AOC, there is a lot of young blood, and foreign blood, that came in and that helped accelerate pluralisation of our AOC. For me in 2030, beyond all the environmental objectives, the success will first come from really building that collective.

NB: Ok, fantastic. It has been great to meet you!

FC: Thank you very much Nick.