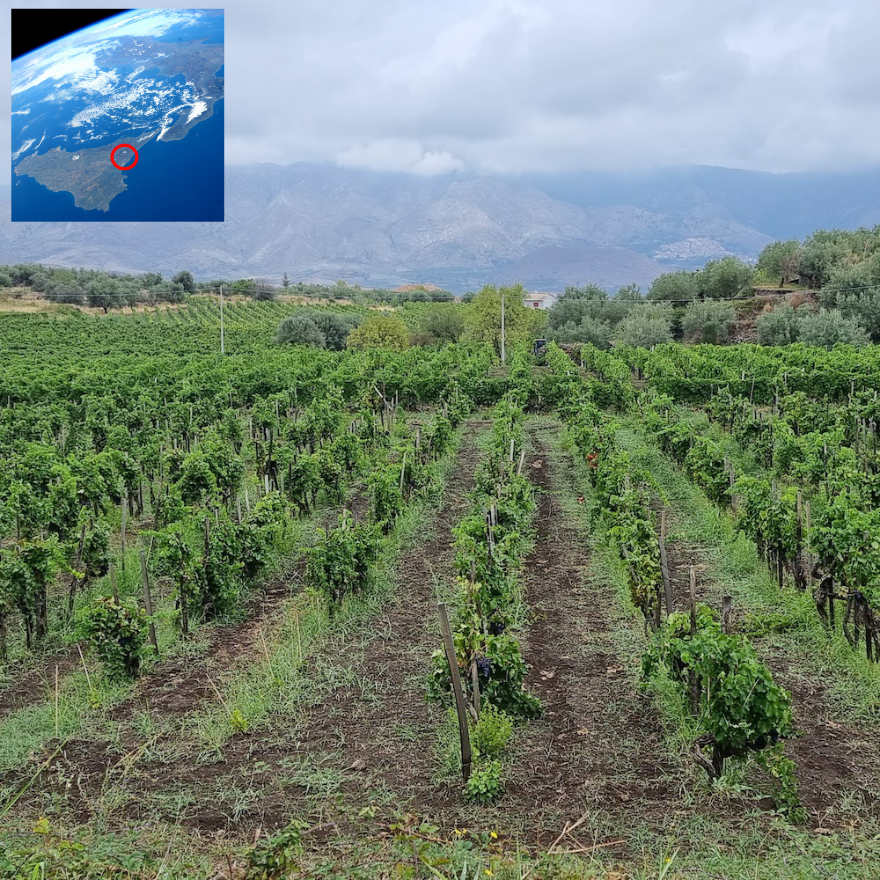 I was recently invited by Sicilian wine producer, Donnafugata, to join a tour of Mount Etna and visit their vineyards in their striking landscape. Donnafugata is a brand with striking personality, reflected as much in the wines as in the artistically evocative labels, as in the people and song that accompany them.

From Catania to the Vulcan

We left Catania in the east of Sicily to explore the different faces of Mount Etna, Europe’s most active volcano. The day before we arrived Etna exhaled her molten breath 9 km’s into the sky, which is 3x her own height.

Our first stop is Donnafugata’s vineyards at 750m altitude on the Northside. They have 21 hectares on Etna. Here the surroundings are green and luscious as we climb up in the bus. Nurseries of plants, lines of nut trees, groves of olives, cactus & of course vines. 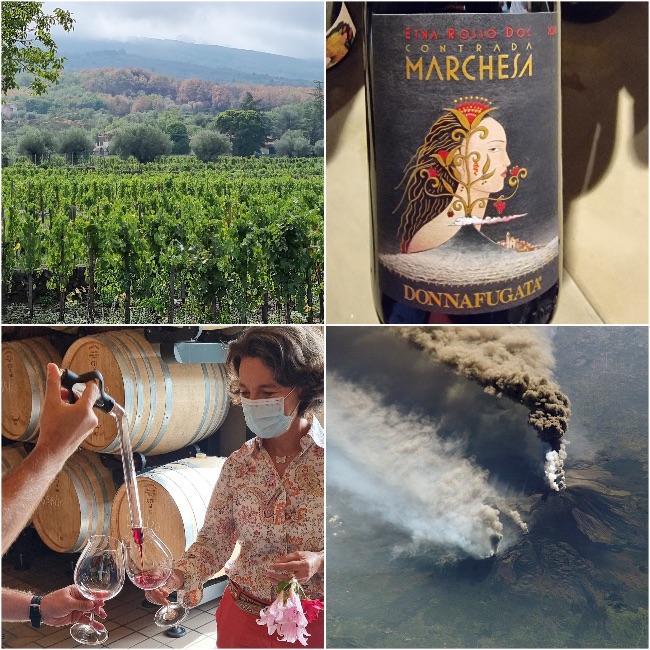 The air is humid and the cloud relentlessly heavy with clouds resembling the dark in-lands of Wales in Autumn. José Rallo of Donnafugata says that this is the only place in Sicily where one gets to experience seasons. Autumnal colours appear on the forested ridge along the horizon. The Contrada Marchesa vineyard is shaped naturally into an amphitheatre with dark sandy soil with volcanic rocks. The grape variety is the indigenous Nerello Mascalese.

We taste the Contrada Marchesa 2020 from the barrel at the winery. Rich spicy aromas lead as darker fruit start to emerge. Incredible structure with slight iron note provides the structure needed to age gracefully.

The Contrada Marchesa 2017 we tasted previously has benefitted from the 14 months in barrel and longer in the bottle. It has a softer complex of flavours from the floral and herbaceous, to the summer berry and balsamic. There is a freshness to the wine that gives gastronomic versatility, especially with my sea urchin spaghetti.

The post-lunch ride up Etna was bouncy as passed through dense pine forests and the ashen-looking crevice that made up the 1981 crater. The fissure opened up along a vertical line and lava flowed down the NE flank towards the town of Randazzo. The wall of molten rock moved slowly in its descent giving local inhabitants plenty of time to pack up and leave before their properties were consumed. This is one mercy I guess. 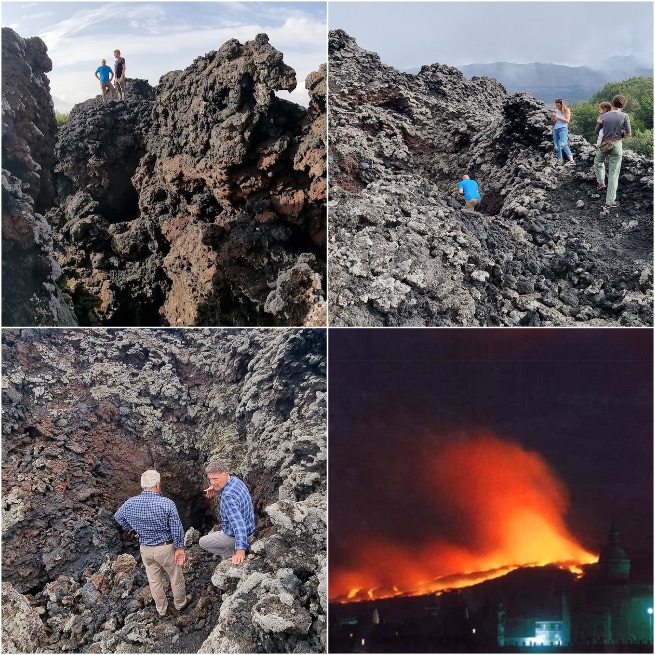 The crater today has lichens, a complex cohabitation of fungus and algae, growing on it that gives a layer of white but the impression remains a raw wound in the Earth’s flesh. It cuts through the luscious vegetation that surrounds us and yet still has a strange alluring beauty.

There are several holes around the crater that indicate a labyrinthine network of subterranean tunnels that lead into the belly of the Vulcan.

Cattle graze happily just below and the weather up here is humid and warm. It is no wonder that wines from volcanic soils all over the world fascinate people. Is it because we are just romantics or because they possess a little of that volcanic power?

Catania - the powerhouse of Eastern Sicily

My reliable source (Baldo) tells me that Catania is where the industry is in Sicily, where the money is made. The centre of the city reflects it in concentrated grandeur and has been built on top of itself several times due to Etna’s leveling influence. 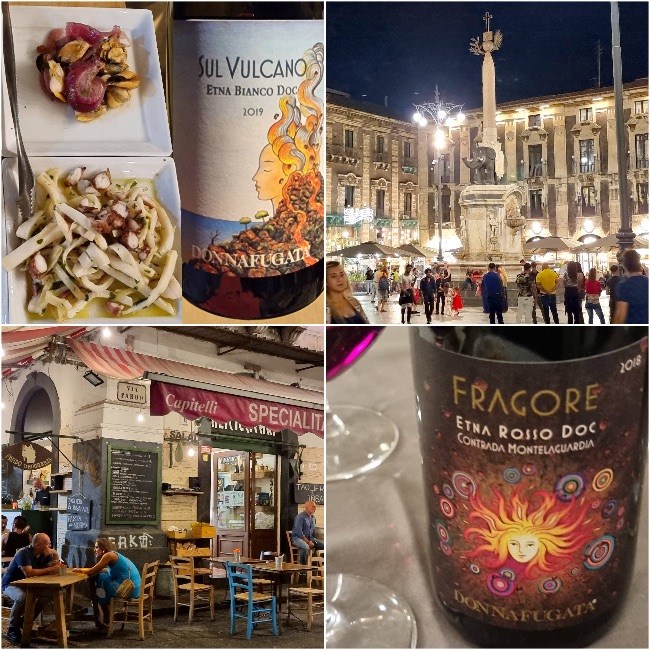 The old castle that sits idly in a piazza used to look out to sea but today is a few minutes walk from the shore, demonstrating that it is not just the altitude of the city but the area that is increased by large-scale eruptions.

In one bar we are shown to the basement where a small staircase feeds into a volcanic tunnel. Oenologist, Francesco, who is from Catania says he has been drinking here for years and never knew about the tunnel, but then he only came here for his 3am last drink, so finding himself in the cave might not have been a good thing.

Another inescapable component of the city is the role played by fish. Hardly surprising for an island like Sicily. The fish market that starts beneath my hotel is open every day from 6am-1pm.

With each meal, the table appears more and more like a Rockpool at low tide strewn with raw delectables.

Our hosts, of course, served appropriate wines. The Sul Vulcano 2019 made from the prevalent Etna white grape, Carricante, has the bright incredibly fresh acidity and tingly fruit and savory notes that make washing down seafood a perfect coupling of action and sensation.

The Fragore 2017 Etna Rosso DOC is made from 70yr old vines at 730 m altitude on the Etna’s northern side from the delicious Nerello Mascalese. The dark ripe berries, a touch of nutmeg, and fine tannic structure make it a perfect match for my Bream in local red sauce.

Catania has a fabulous ambiance of street life. A thrall of weather-beaten humanity spills out across tables and streets with chatter, laughter, food and wine in varying proportions, completing a vision of glorious Mediterranean life.

The Radicepura Botanical Gardens directly east of Etna, looking out to sea, are the Kew Gardens of Mediterranean & it was a huge unexpected pleasure to visit during the festival.

We were guided by the festivals’ creative director Antonio Perazzi. He took us on a long walk highlighting the ‘Gardens of the Future’, showcasing 7 competition winners from 100’s of entries who produced Mediterranean garden designs that have been created in the park. 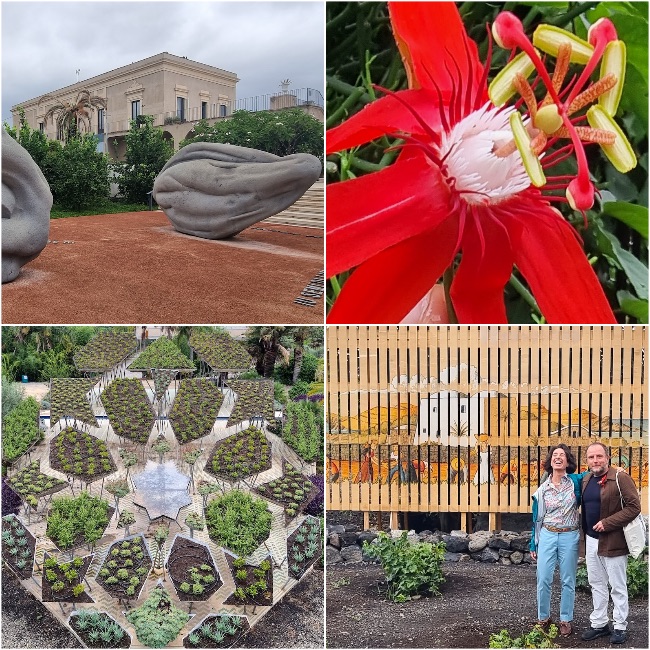 One of the winning designs from Africa included randomly planted seeds across the installation that represented sprouting of ideas, as in the creative process.

There were also fabulous designs and sculptures intermingled with a broad array of plant species. I was especially interested in the philosophy behind the garden projects that encompassed differing forms of regeneration, re-wilding, & balanced biodiversity. It is a feast for the senses. It is worth checking radicepurafestival.com to learn more.

Easing our wine theme into the visit, Donnafugata collaborated with Radicepura to create a garden from Pantelleria. José talked about the need to protect all the plants on the island from the strong Scirocco winds that blow hard and can dramatically reduce the yields of all fruit trees. Vines are planted in dug-out ‘basins’ and a whole orange tree can be secluded in its own wall garden. More on this anon.

With the Chelsea Flower Show in the news in the UK, it felt a little bit like home from home. Prickly pears feature in this region with hardiness, beauty, and bounty. In London we are used to pear cider but, as yet, prickly pear cider is not a thing! Early days I suppose.

As the visit drew to a close, we popped numerous corks and a number of which became initiates in the art sabotage, the act of sobering off the top of a sparkling wine bottle.

Although typically done with a sword or similar sober, it is much more vogue these days to use one’s glass. Possibly a good picnic tip for those wishing too impress?

I particularly enjoyed the sparkling Brut made from Chardonnay and Pinot Noir in the traditional method. Dry, with a mixture of biscotti and fresh pear fruit and bright clean finish, leaving us absolutely wanting for another glass… and so it was.