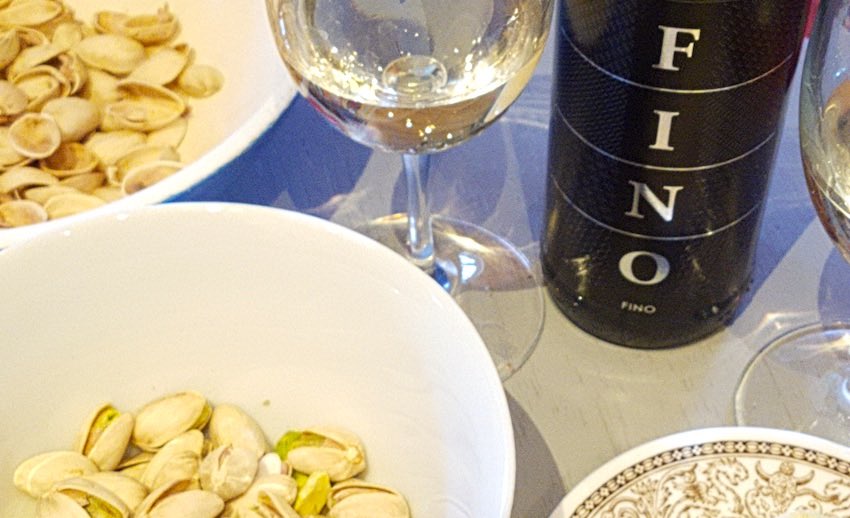 This evening after our golden sunlight strewn lockdown stroll, we arrived home with more than an ounce of peckish-ness. It was a perfect moment to open a bottle of Bella Luna Fino Sherry, made by producer Sanchez Romate, and serve with pistachios. British people were once so enamoured with sherry that (even with a vastly smaller population) the region could not keep up with demand.

One of the reasons for this is obviously the range of styles and flavours but also the huge potential for pairing with food. Fino is an elegant wine, with enticing aromas of bread dough and almonds. It is also bone dry and excites the palate for any of a wide spectrum of foods.

Fino is made from Palomino grapes that are gently crushed but not pressed. The juice is then lightly fortified with grape spirit before entering the solera system on the top row, or, criadera, as the system of rows of arranged barrels are called.

The solera system by which sherry is aged means that it is impossible (illegal even) to pin vintages on bottles. The often 100-year-old 500litre (137 gallons) wooden barrels, called butts, are arranged from between 3 -7 rows high. Wine is drawn from the barrel on the bottom when needed and then topped up from the one above layer by layer.

No actual blending takes place so the different vintages added from the top remain in the rows of barrels and are all ageing and developing in complexity.

The secret of delicacy

The butts filled with the fortified Palomino juice are not filled to the top so that the juice is exposed to a portion of air. However, the ageing juice is protected from oxidation by a layer of white mould that develops from the yeast. This is called 'flor' and for much of the year forms a protective layer over the juice. Some oxidation does occur and that adds further to the complexity.

With the words 'complexity' and 'delicacy' in mind, the fino is raised to the lips and imbibed. So fresh, dry, herbaceous and nutty with a saline finish, it is the ultimate aperitif, exciting the palate for food.

I don't understand how these wines are so inexpensive and yet carry so much age and refinement in a glass. They offer a fabulous range of flavours to those who are interested in the exploration of pleasure. Food pairings popularly include seafood, sushi, almonds, green olives and much more. Tomorrow we have a Zoom tasting lunch, wines to taste and an evening of Welsh Pinot Noir but I am still excited for my early evening sherry!