Careening through central London’s subterranean arteries to get to wine tastings inevitably provides a combination of anticipation and perspiration. When the wine tasting in question is at Claridges and the wines are produced in a Bordeaux style, blended varieties, and tendered by the esteemed Bordelais winemaker, Pierre Seillan, there is plenty of promise in the endeavour.

An introduction to Vérité

Barbara Banke and her son, Christopher Jackson, open the tasting with the backstory of how these wines came to be. The seeds are in a love for the fine wines of Bordeaux blended into the (then) untapped potential of the terroir in Sonoma County.

The connection to Bordeaux was further strengthened by enlisting the expertise of sixth-generation winemaker Pierre Seillan who, when first approached by the Jackson’s, was very interested in making wine in the United States.

Barbara recounts bringing him over and, with her late husband Jess Jackson, touring their mountain vineyards in Sonoma County. Seillan was, she says, entranced by the possibilities of making wine in Sonoma.

Both Banke and Jackson were huge fans of Chateau Petrus, thus the gambit of making a wine of comparable quality was mooted as Seillan set about planting a Merlot vineyard. In remembering these events, Banke admits they had “a lot of nerve” to try to go one better but also that “we have given it a good go since 1998, our first vintage.”

Precision… in every aspect

Christopher Jackson puts a lot of emphasis on the precision approach to winemaking that Seillan takes. Working with the assistance of his daughter Héléne Seillan, he selects the grapes for the blends that he determines will produce the signature of quality that Vérité strives for.

Beyond grape selection, every stage of the process is micromanaged, making decisions that draw on a huge diversity of possibilities.

Clarifying the trans-Atlantic winemaking relationship, Barbara says, when Pierre Seillan first joined them, “The French were proud that he had come to America to teach us a thing or two.” And that with Seillan producing these wines, came the opportunity to show them back to France.

Chris Jackson says with pride that “Pierre was knighted by the French government for his efforts in California.” He goes on to highlight the collegiality and respect shown by the French in that you can be sitting in a restaurant in Paris and Vérité will be on the list.

The Jackson family have made news this year with their partnership with Torres Family Wines in seeking to maximise efforts to reduce carbon emissions and look at ways to become more resilient to climate change. Earlier this year in Porto, Katie Jackson made an impassioned speech, especially with regard to succeeding generations.

Chris Jackson echoes this commitment saying, “We want to be multi-generational and what is critical to that vision is maintaining and respecting the integrity of the land, the climate, and of the ecosystem of which we are a part.”

Citing their property in Alexander Valley, Jackson says that only 17% is planted. The rest is natural ecosystem where boar and wolves roam in the midst of a rich diversity of wildlife.

Discussing the Californian drought that has been causing widespread controversy in the state as the finiteness of water is a key issue, Jackson says, “I think dry farming would be a mistake… when we do irrigate, it is minimalistic and what we do irrigate with is extremely pure mountain spring water.” 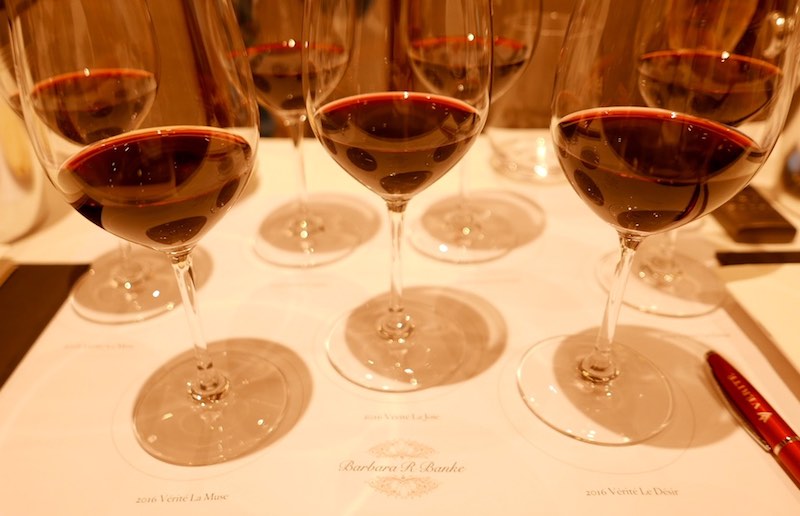 Dark fruit, savouriness, A real currant juiciness with big tannic structure. The finish is clean and long, luxurious. Balance of sweetness, acidity and tannin. Not cloying at all.

Rich dark fruit but with a lightness on the palate that keeps singing. Firm youthful tannin but not overbearing. Nicely balanced. A star in youth.

Cherry chocolate, has a spicy aromatic lift. Fruit and firmness from young tannin. Really attractive liveliness and freshness from the acidity.

Gentle savoury notes, slight toastiness, fruit right at the back.