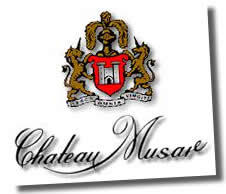 Chateau Musar
I vaguely remember reading an article in GQ during the early nineties and they’d themed a an art exhibition around the Orientalist paintings of the 18th and 19th centuries. These Middle East region historically had a great impact on the western imagination. Now I’m writing about Lebanese wines at a time when the Middle East is in turmoil. I’m unable and unqualified to comment on the troubles there; but I can write about the wines which I tasted recently.

When asked what my favourite wine is, my standard answer is "it depends" but when I’m pushed to say something, I answer "Chateau Musar". I like it because in an age of homogeneity and uniformity; Musar stands out. There’s often a marked variation from one bottle to the next – even within the same vintage – on the nose the wine can be quite volatile; although that blows off after a while, in short it’s not like any other wine. I don’t just like it because it’s different, though. I like it because it’s good.

It’s very good. I was first introduced to the wine by a friend, Gabriel Yareed. He’s a composer and amongst other things, he wrote the music for the film ‘Betty Blue’ and won an Oscar for his work on Anthony Mingella’s ‘The English Patient.’ He’s a friend of the Hochar family who make the wine in Lebanon’s Bekaa Valley. We used to drink bottles of the stuff on sunlit winter afternoons in Notting Hill, discussing life’s finer points in the midst of very glamorous people chattering and drinking cocktails.

Whilst many people are surprised to hear about Lebanese wine-making, it’s been going on there for thousands of years: since the time of the Phoenicians – the founding fathers of the wine trade. The climate in most of the country isn’t ideal for wine; but the Bekaa valley is at altitude – this ensures that whilst it’s hot, it’s never too hot; the landscape is very much like that of northern California; arid scrub land flecked with green.

Chateau Musar itself is something of a cross-between; although I’m never sure what it’s a cross between. Sometimes I’m reminded of Claret; sometimes of the Rhone; sometimes of a South African wine; and other things at other times. The grapes used are: cabernet sauvignon, carignan and cinsault the wine is racked in wooden barrels and isn’t blended until the end of the second year, according to taste and so the proportions are different every vintage. Finally, in an age when wine makers in Bordeaux are so keen to sell their wine, that they sell before it’s even been bottled; in Musar, they refuse to sell their wine until it’s ready to approach and has passed it’s sixth birthday. I recently tasted vintages of Chateau Musar stretching back over more than 40 years: here are my notes

1993: Rich and bright colour. Wonderful hint of cedar, accompanies brambles and berries on the nose. The fruit carries through on to the palate and is supported by a slight taste of lead pencil shavings; structure very similar to a decent claret, developing a slight garnet edge.

1989: The colour is starting to clear, but the wine is not yet transparent – still good and dense. Hint of cherry cough sweets on the nose. Red fruits and a hint of coffee, full body and mid-weighted texture; good acidity and ‘grip’.

1988: Good and bright. Candied sweets and Brandy Balls on the nose – cinnamon. Slightly sharp acidity, balanced by sweetness – think poached rhubarb and Demerara sugar. Will last for another ten years.

1979: Brick red in colour. Disappointing; partially oxidised, and as a result fairly tart – like orange juice.

1978: slight cork-taint, but in a subtle and pernicious way, it’s strangled the fruit without being obvious on the nose. Faulty bottle.

1972: Beautiful tawny colour; picked a year before the Yom Kipour War and the Oil crisis. On the nose, this smells exactly like a pink lilly; in the mouth, lovely round berry fruit married well with wood.

1970: The colour is beginning to drop out of the wine and the acidity is very fresh, almost like an old white wine. Blackcurrant fruit with a delicious hint of caramel to round off the wine.

1967: Very fine and delicate, mature appearance, slightly oxidised with a lemony acidity. Delicious in the same way that very old champagne is. Not to everyone’s taste. This is called the Gout Anglais – in reference to the fact that  we in this country have had a reputation for liking wines which are ‘dead.’

1966: Pale orange/brown colour, again good acidity and grip. The fruit has mellowed and notes of oak flavours preponderate – as in old malts and cognac.

1959: the best wine by a mile. Pale tawny colour. Nutmeg, cinnamon and sandal wood aromas on the nose. Round in the glass with a tremendous body, especially for a wine of this age. Thick and sweet like liquorice, notes of toffee and oak. There’s something reminiscent of Pedro Ximenez, even though the wine isn’t sweet; it’s powerful, old, full-bodied and ethereal.

I also tasted the whites. Made from obeideh and merwah two grape varieties indigenous to Mount Lebanon; it’s not just the grapes that stand out, unlike most whites, these should be drunk at cellar temperature – about 15 degrees. If you like Hunter Valley Semillon or Madeira I think you might like these

1991: Hint of ginger and even cinnamon; Very rich, the spiciness along with the quince-like acidity brings about a slightly antiseptic taste (TCP.) It’s familiar, though and more attractive than that description sounds.

1990: Platinum or pale straw in colour with lemon rind, white peach aromas. This interplay of bitterness and sweetness reminds me of a very good Hunter Valley Semillon. That ‘waxiness’ is supported by a plush sweetness in the fruit. Ready to drink, but will keep.

1975: Full yellow/gold with notes of malt whisky and oak on the nose. Soft like molten candy; exquisite and poised in the mouth. A touch maderised; I love it. Will probably last for ages, but why wait?

1969: Deep burnished gold colour. Delicious aroma of poached pear; rich, ripe fruit and honeycomb on the palate. The wine lingers for a moment and then is gone – ethereal and delicious. Drink now.