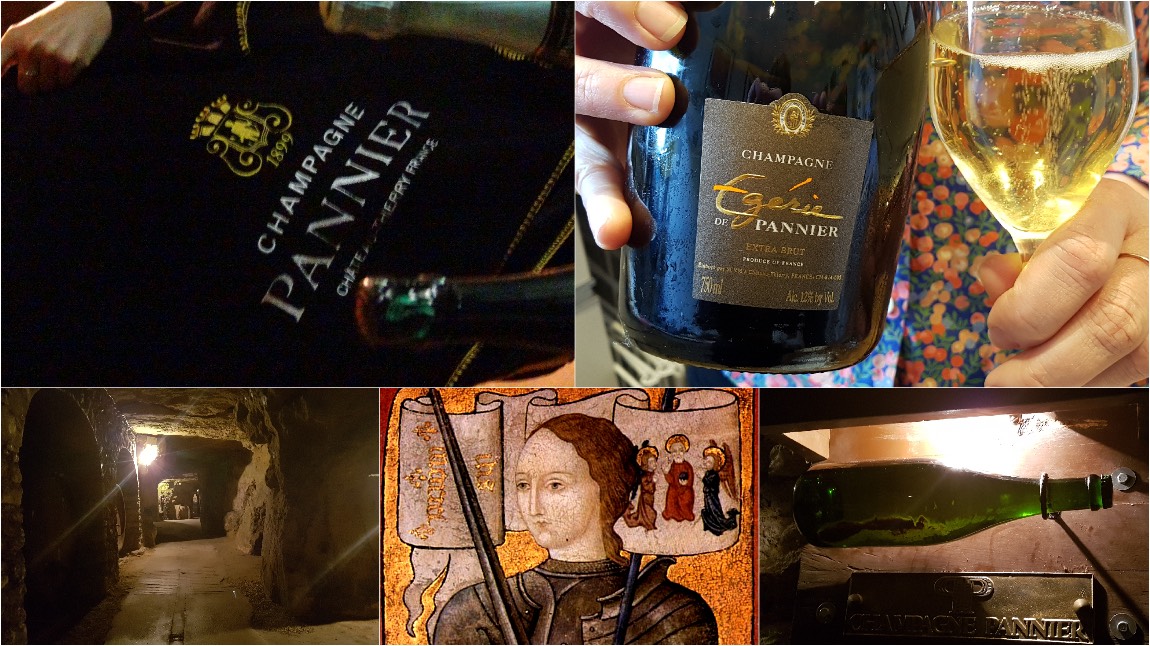 Along the Marne Valley, west of Epernay, the town of Chateau-Thierry sits facing the river, wracked with the scars of a violent past. Overlooking the town is the grand American Memorial commemorating the World War I, Battle of the Marne where so many American soldiers gave up their lives against the advancing Germans.

Perhaps there is some poetic justice that this town and the wider surrounding area survives as an ancient and critical component of a sparkling wine industry that is known in all the far reaches of the world.

Cut into the steep hills surrounding the town, is a 12th-century quarry. It was originally used to obtain the stone used to build the, once fortified, Chateau-Thierry, a labyrinth of tunnels that today are the cellars of Champagne Pannier. Uniquely, the cellars of Pannier require no descending climb, the entrance being cut into the side of the hill.

Pannier’s reach across the region

Sourcing grapes from across the region, Pannier produces a range of wines, from the reliably classic Brut champagne to the award-winning cuvée Égérie. With exports to over 20 countries, Champagne Pannier exemplifies the greater story of a bubbly drink that has captured the imaginations of wine-lovers for generations.

This year the hard work and expertise demonstrated by Pannier has paid off in the only way that we can determine true quality: on the senses. The Extra Brut Égérie 2006 has recently been awarded a gold award at the Champagne Master’s tasting, organised by The Drink’s Business.

For a cooperative, producer lined up alongside the biggest names in the world of bubbly, this is a noteworthy success. Égérie 2006 delivers the highest quality champagne at fraction of the price one might expect to pay for this terrific vintage.

Terence Kenny is the straight-talking Export Director at Pannier, and knows as much about the champagne business as he does about what good champagne should be, and taste like. Here he talks to Secret Sommelier about the awards, the competition and this year's exciting vintage:

Secret Sommelier: What places the Égérie de Pannier Extra-Brut Millesimé up there in the gold category alongside brands that, at the retail level, command double and sometimes triple prices?

TK: The quality of the grapes used along with the meticulous vinification by Phillipe Dupuis creator of the Cuvée Égérie and behind the helm since its inception with the 1985 vintage.

Secret Sommelier: Do you think the award means the vintage is peaking in terms of drinking age, or do you think there is more ageing potential for the 2006?

TK: This cuvée will go on much longer but the aperture of the window seems to be now.

Secret Sommelier: Have their been changes in consumer habits that you’ve noticed during your long career in Champagne?

TK: Over the past thirty years consumer habits have changed from a somewhat blind indifference to quality towards a quest for knowledge and provenance. Where once big brands dominated the “save the best for last” French service of Champagne with dessert (yes don’t let this be denied) with over-dosed heavy pinot laden cuvées, things have gone full circle with freshness and chardonnay fore fronted blends used for the aperitif.

Small has become beautiful and this can be disparaging as some of the best and most famous cuvées are produced in very large quantities. The cuvée Égérie 2006 was about 14,000 bottles which is peanuts compared to others produced in the millions. We are seeing a lemming type following for small producers who hoist the terroir flag, but let’s not discard the chefs de caves who have to turn out a million bottles of non-vintage brut to a most exacting qualitative demand.

Secret Sommelier: What are you looking for when you pick up a glass of bubbly that defines quality and character for you?

TK: When I raise a glass of champagne I want straw gold shimmers, minuscule bubbles and a bouquet that is discernible a foot away from the nose. I want to offer that glass to someone and watch them discover the joy and pride of this great wine and boom I want to see an empty glass a few minutes later. If a bottle of champagne served to 4 people is not emptied in 15 minutes something’s off, either the wine or the company.

Secret Sommelier: The sparkling wine category is seeing rising competition from around the world, paired with increased popularity from drinkers. Do you see any challengers to the Champagne crown as king of the sparklers?

TK: The rising popularity of sparklers is a great way for champagne producers to keep on their toes. In the early 90’s there was the journalistic hoop-la of “who needs champagne”. Now go down in your cellar and bring up that bottle of Cava or Crémant d’Alsace; it’s undrinkable. Champagne is still going strong. It’s the only sparkling wine that can stand the test of time. This is the balance between the grapes and the terroir. Can’t truly be replicated.

Secret Sommelier: How do you see the relationship between the small grower-producers and bigger operators?

TK: Champagne is intertwined. You have small producers who sell part of their harvest to the big houses. You have big houses that experiment with a small batch cuvée. You have cooperatives doing both. Everyone gets along. Providing there is reciprocal respect.

A vigneron on his second year of elaborating champagne and wanting a price higher than the major brands (I sell/used to sell my grapes to xyz grande marque) is a bit hard to take seriously. Without the big brands the price of grapes would collapse.

Secret Sommelier: There is a lot of excitement around this years harvest results. How are things looking at Pannier?

TK: 2018 has been the perfect coalescence of quality and quantity and the excitement and joie de vivre can be felt throughout the champagne region. Now it is up to the winemakers to work their magic. The materials are there for some great cuvées.