World-class sparkling wines from the South East of England would have been unspeakable within the range of my own (relatively short) lifetime, but that is no longer the case. Producers like Herbert Hall are working away, like alchemists, crafting delectable liquids from ancient soils and a relatively new, yet still in flux, climate. We dropped in to meet and taste with winemakers, Nick Hall and Kirsty Smith.

Wending our way down to Marden, in Kent, we were pleased to be invited by friends to come and sample the wines of their local vineyard, Herbert Hall. I had tasted their wines fleetingly a couple of years ago at another tasting in Kent but the day was long and my memory faded.

It’s a chilly wet wintry Friday and the landscape, even covered in rows of vines, has a T.S. Eliot bleakness to it. As we walk around the vineyard plots, owner, Nick Hall, explains that the ethos here is organic estate grown fruit, and small-batch carefully crafted wines. The varieties planted here at Herbert Hall are 40% Chardonnay and then 30% each of Pinot Noir and Meunier.

He works closely with young winemaker Kirsty Smith, who soon after winning Herbert Hall’s independently judged ‘Young Winemaker of the Year’ award, approached Nick and handed him her zero-option-you-must-employ-me contract. The rest is in the process of making liquid history! 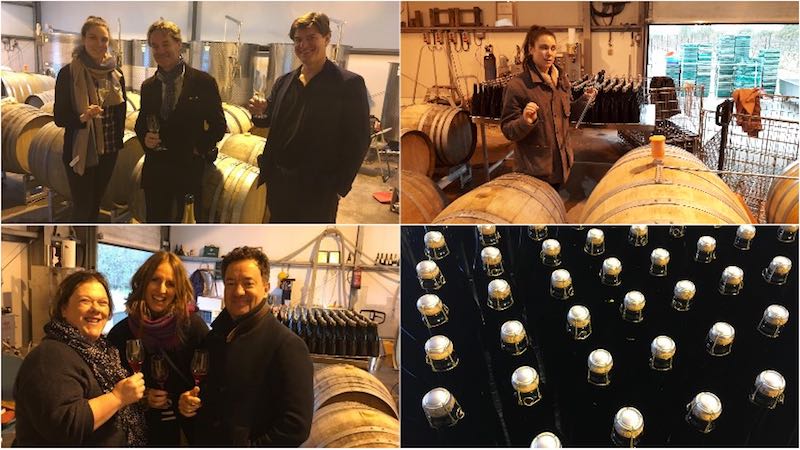 Our arrival in early November meant that all the hard harvest and pressing work was now firmly behind us. The assortment of steel tanks and barrels packed into this modest structure stamp Herbert Hall with a true garagiste style. With one upturned barrel positioned for tasting, the excitement levels were up and the wintry blues dispelled.

The first base Chardonnay wine we taste from the tank is bursting with fruit and bright acidity. It is only a hairline from being desirable in its current state as a still wine. Herbert Hall produces no still wines, only sparklers, and because of lees contact and barrel ageing, the style is finely textured, structured, yet preserving the freshness of fruit and overall mouthfeel. Dosage is low at 7g/ltr, just enough to balance the wines.

Herbert Hall Rosé 2014 - The same blend as above, but less overt on the summer fruit, giving us an elegant alluring sweet and savoury perfume. A different profile to the 2015 with more subtlety and complexity. Taste of apple, cherry, red fruits, dry, long and very satisfying. I was developing a severe case of one-more-glass-syndrome until…

… a half bottle emerged from the fridge, unlabelled, opened and poured (it was labelled for the photo!).

Herbert Hall Brut 2013 - I didn’t note the exact percentages of each variety of grape but this was my show stopper. Open aroma of crisp apple, pear and watermelon, combined with seductive emerging autolytic character. To taste is alive, young and dancing. Great structure, rich, complex flavours carrying over from the aromas but really pronounced on the palate. Also, the half bottle-pocket-size is very cool (much more so than hip flask!).

To summarise in brief, these are great sparklers and well worth getting hold of. Of course, small production means stock limitations, but with years like 2018 beefing up the volume, and an increasing number of variable quality wines hitting the market, make sure Herbert Hall is on your English hit list.

*Special thanks to Toby and Kate for arranging/inviting, and a huge thank you to Nick and Kirsty for receiving us.

Find out more about Herbert Hall on their website.