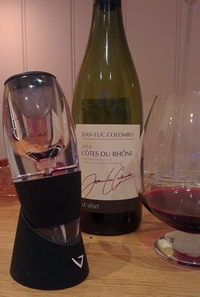 I've got a new wine toy.  I am pleased to point out that it is not a funky corkscrew that looks like it has been designed to to pop rivets into rail tracks (if that is what rivets are popped into!).  It is in fact, a wine aerator called 'Vinturi'.  I can't help being sceptical regarding such devices but having been seduced by the sleek design decided to put it to the test.

This test took place at our neighbours flat before dinner where we were joined by their Portuguese wine importing friend, Javier.   We started off with a couple of his samples from Portugal (it was a couple of months ago now so forgive me for not recalling what they were).  The results were very good.  We all agreed that the vino-test-tube (with its own docking station and suede travel pouch) really did open up the wine, allowing for some enjoyable fruitiness that was much more concealed in the non-Vinturi processed sample.

Then this evening I have just returned back from a trip and aroused a desire for minty lamb and a glass (or two) of red wine to warm me up against the backdrop of a most peculiar English "summers" day.

The Vinturi grinned back at me as an idea popped into my head.  I thus took two glasses and poured a glass of Jean-Luc Colombo's Cotes du Rhone 2010 into one.  Then seizing the Vinturi I poured through it another glass.  The device gives off a wonderful gurgle and splutter as it blows through.  After this I hid the bottle of wine and the aerator device.

With two loaded glasses on the starting blocks I shepherded by good lady into the kitchen asking, "Which of these two wines do you prefer?"  I was convinced she'd call me an idiot and reply that they are the same.

But she did not. She simply took the sips, put the glasses down and pointed at the Vinturi-treated sample and said, "Definitely this one with the more fruit!"

Voila!  Job done.  This test acted as a good control as she did not know that they were even the same wine so there was no instinctive guesswork going on to guess which had been aerated.

I followed suit and had to agree that the aerated wine was much more open and lively.  The difference was distinct.  So, in conclusion, the Vinturi does what it says: it opens up the wine, making it more pleasurable "from the very first sip!"

Hats off to that!

Continuing on with the evening I am pleased to report that the lamb steaks came out coated in mint sauce and were laid over bed of cos lettuce, spring onion, vine tomatoes and mixed with more mint sauce and olive oil.

Jean-Luc's blended Cotes Du Rhone is excellent value at £9.50.  The grenache gives it that strawberry sweet opening that is backed up by the spicy syrah which goes really well with the lamb and mint.

The whole ensemble was a pleasure.