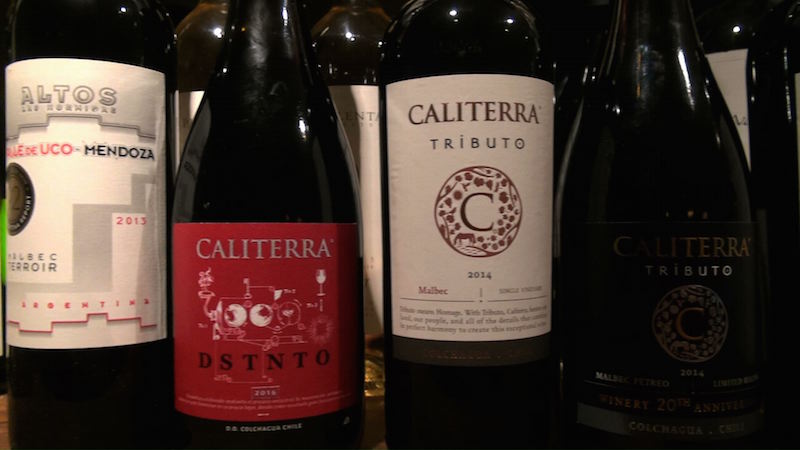 The tasting was set up in the basement of Casa Malevo in Connaught Street London, a place famous for exceedingly high quality steak, a frequent food pairing for the malbec grape we were due to taste.

Young winemaker, Rodrigo Zamorano, himself confessed to not being impressed with malbec when he first started tasting it in Chile and Argentina (despite spending a long time touring French regions, he actually never visited Cahors). So to be sat in London exhibiting a range of wines that have inspired him as well as those he has created, signals quite a volt face.

What made this tasting so interesting was that the winemaker was presenting his own wines placed within the context of, not only the wines that have inspired his own endeavours, but those that are arguably his greatest competition.

A grape of 3 nations?

Argentina seems to have made a home for malbec in the minds of the consumer but really its roots are much deeper in Cahors, SW France, and also still, marginally, as one of the grapes still used in Bordeaux blending.

Although France is where malbec has been mostly found over the centuries, when I asked Rodrigo how long the grape variety has been growing in Chile he says, “A long time, over 200 years! We have plants we are working with that are 80 years old.”

When I voiced surprise, having expected this to be an experiment growing out of the Argentine success with the grape, he then cautiously (but with a sense of humour) says that it was very likely malbec arrived in Chile first, not Argentina. That certainly adds a little more perspective than I had bargained for!

I must admit that in the past I have been a bit disappointed with malbec’s we’ve selected in restaurants, so this did feel like a make or break evening. Most of my judgement was based on wines from Mendoza so this was a good opportunity to place the grape in some sort of regional context

This tasting has changed my view (see notes below), meaning I am now far from giving up on malbec.

I asked if Rodrigo could somehow place Chilean malbec in relation to Cahors and Argentina, to which he replied:

“We have a climate more similar to what they have in Cahors. The thing is that you really have to have the soil. That is more difficult. That’s why we find that we have this specific soil that is more similar to what you have in Cahors. We take profit of this irony to make this sharp and very clean malbec but also the climate is very gentle and helps to give us [our own] style of wine. So if you ask me to describe malbec in Chile then I would say we are more close to Cahors than to Argentina.”

Rodrigo talked at length about how the climate and soils effected the typicity of the wines in ways he hadn’t expected. I asked if he could give us a single line on each of the three regions we tasted:

Cahors: More complexity, sharp, time helps it a lot in terms of the quality of the wine

Wines tasted with the meal: 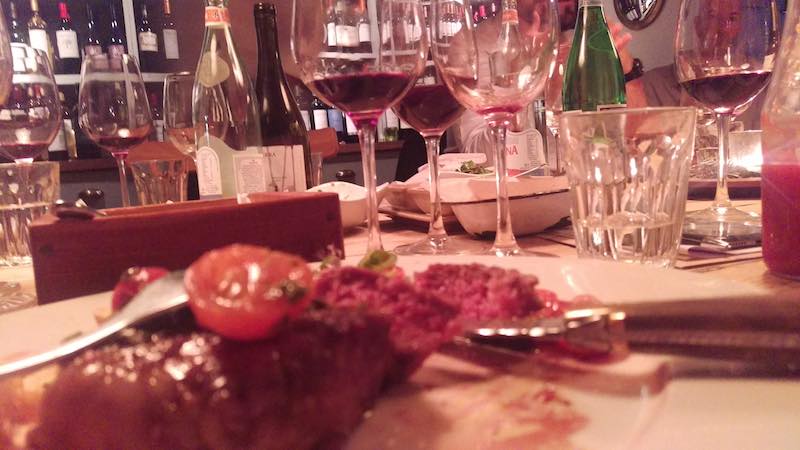 Lovely dark fruit, attractive spice and even hints of dark chocolate. Lots of life in the mouth, silk tannin, so an obvious choice for the fine steak.

Dark inky appearance with layers of dark fruit aromas. Gorgeously rich ripe dark fruit in the mouth and lovely tannin for the food. Different from the first wine in the depth and intensity of the flavour. Longer length. Great wine!

Dark in colour, lovely hint of rose aromas as well as strawberry, blackcurrant, redcurrant. Young dry tannins, richness in flavour with the red and blackcurrant. Can drink now but

Dark berry fruit aroma, different from the others in that there is more earthiness, peppery perhaps. Has a more Bordeaux taste to it. Unctuous and begging for big meat dishes, roasted veg. Interesting as it is a marked difference from the above wines.

Not so interesting to me as the preceding wines. Lighter in colour, more mineral and red fruit,  sweeter tannins.

The cornerstone of Caliterra’s winemaking endeavour from inception has been to stick to the fundamentals of sustainability.  Rodrigo says the three tenets they have worked with are: terroir, quality and being environmentally friendly.

At the time they were doing this back in 2006/7 no other Chilean producers were interested in sustainability. They were “more interested in growing exports and the business!” This even drove the choice of the sites for the vineyards. The location in Colchagua is far away, isolated and uncontaminated with chemicals that other farmers may use.

During the formative years, the Caliterra team spent time communicating with universities in New Zealand, Germany and other places where sustainability practices were being developed. They then brought this knowledge home, approaching the ‘Wines of Chile’ in 2011 to share their “code”, so that it could be applied to other wineries and drive and new responsible wine making practice.

Today more than 50 wineries in Chile are accredited.

When asked what sustainability in the vineyard actually looks like, Rodrigo describes it as a table with 3 legs where care in the vineyard is balanced with care in cellar and right through to the chain of production. For example:

Instead of trying to place the emphasis of the wines on being “organic”, Rodrigo states that it is the practice of sustainability that resonate with a younger generation of wine drinkers that they are keen to engage with. He makes it clear that these processes and sustainable ambitions are not something to be searched for in the wine, they are a set a values that they are proud off. That is certainly important to me and many drinkers I know!

On the community level, engagement is more practical, including educational programmes to promote environmental awareness. A good example of this is in the teaching of conservation, where the winery played a role in changing the perception of birds of prey from being a competitor in hunting, to be being a valuable method of control for pests such as rats.

A taste for the sustainability of wine

This was a refreshing and fun tasting that has made me less sceptical of malbec than I might otherwise be. I have friends who routinely associate steak with Argentinian malbec and although I am not trying to dissuade anyone from drinking the fine wines of Mendoza and elsewhere, having some perspective on this grape is highly valuable and may increase the appreciation of the overall gastronomic experience.

Add to this that wineries in Chile are shifting their focus to issues that have great resonance with the younger wine drinking crowds born from the late 1980’s onwards, Rodrigo as a flag bearer for Caliterra is likely going to have a bright future ahead.