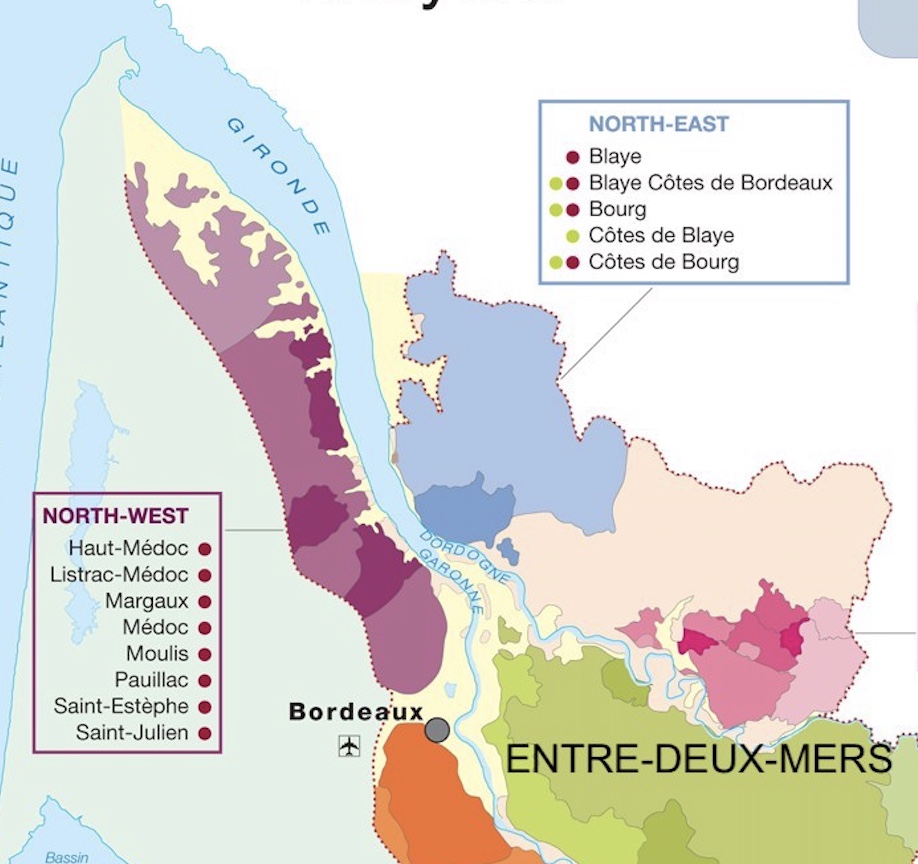 The Entre-Deux-Mers is a region within Bordeaux, lying to the East of the city along the right bank of the Garonne river on onside, and the Dordogne river to the north. Entre-Deux-Mers, or “between two seas” refers to these two tidal rivers that meet at it’s northern-most tip, forming the wider Gironde that meets the Atlantic Ocean. At specific times relating to the tides, surfers will arrive at a set location along La Dordogne, paddling out to catch the precisely timed wave, known locally as “du mascaret”.

The Chateau-Sainte-Marie is less what we might imagine a chateau to be, as it is an arrangement of old stone buildings with winemaking appendages added over the centuries. The signature cruciform can be seen inlaid into the porthole of one end of an old building.

Stéphane explains how there is paperwork dating the place back to the 14th century, where Benedictine monks made red and white wine to serve, especially in mass, at the nearby, ruin, (see below) Abbey de La Sauve-Majeure.

The monks and their way of life at the abbey have long departed. Stéphane took over the 78-hectare estate from his father in 1997 and has been part of the evolution in this part of Bordeaux, from the production of bulk wines to higher quality fine wines.

Sustainable and more natural processes are becoming essential to the ethos of winemaking across the world today, as a degraded environment and changing climates threaten the way we live. Stéphane cites his own daughters asking questions about how the winemaking can be more natural, sustainable, and cleaner in their approach. He says he is setting out to produce wines that reflect less their time in oak, and more the expression of the fruit, the soil and climate.

Stéphane has a broader interest in communicating the changes this region has undergone, coupling historic legacy with a modern discerning style. He spent 4 years as the president of the syndicate of wines of the Entre-Deux-Mers, an area of viticulture covering 60,000 hectares, the largest in Bordeaux. Where a sudden widespread frost in 2017, and 15 minutes of hail on 2018 have seriously impacted some growers yields, there is a determination to keep improving the quality of the wine that is produced, and so the reputation of this historic and beautiful place.

Discussing climate change and how Bordeaux winemakers are responding:

While we were tasting with Stéphane Dupuch at Chateau Sainte-Marie, a conversation began about how winemakers are responding to the challenges they are facing from weather extremes as a result of a changing climate. Stéphane's answers are candid and insightful in giving us a snapshot of the current situation. 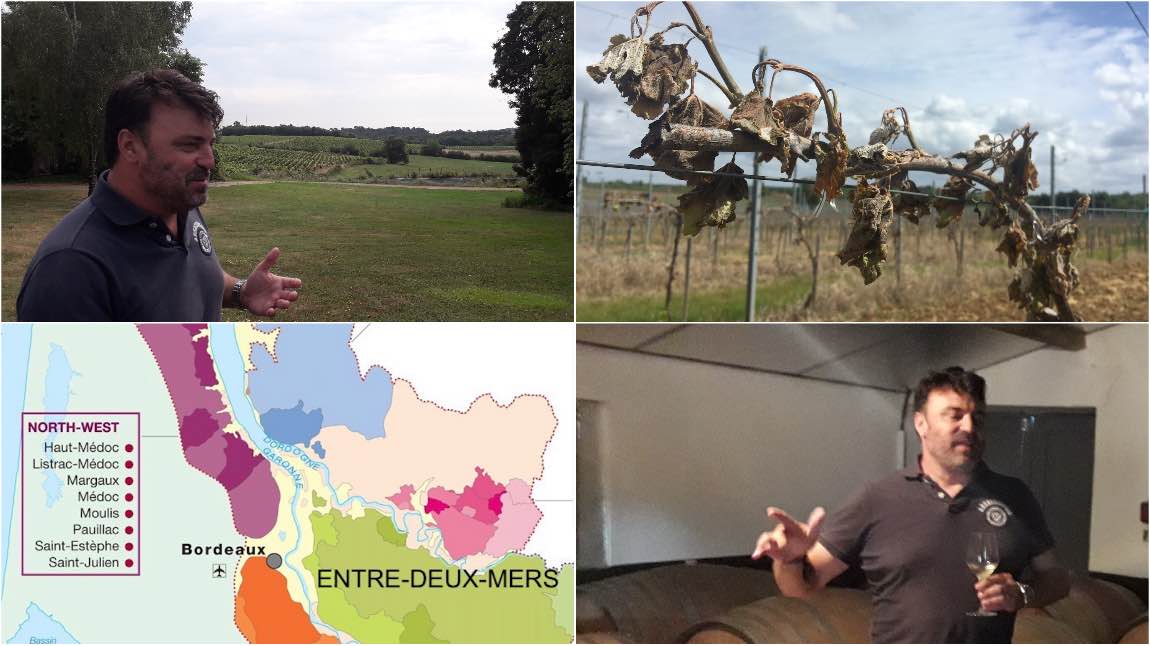 Secret Sommelier (SS): What measures do you currently take to respond to climate change challenges?

The software calculates if you will have a development of mildew, rot, botrytis. With this, they can give you a percentage of risk. For example, the risk of mildew is very very high. And you then decide what you want to to do. But you decide. They don’t tell you that you have to treat. The software just gives you the percentage risk.

You watch the forecast and decide that if the forecast is wet for the 3 next days, you decide to treat or not.

SS: How accurate is the forecast?

Stephane: Yes! We are a group now and what is important is that we exchange and share our information. We have a group of 150 meteorological stations, not only in the Entre-Deux-Mers, but also in Saint Emilion, in Medoc and Sauternes.

We exchange the data and you can also put what you have seen in the vineyards. (EG) I have some mildew in this parcel because this parcel gets much more water. So we know how many millimeters of water we get in this parcel. For example, we have a spot called Le Jardin, which is just here. In this space, it is 3 hectares, we have a lot of mildew here. We have seen that we have to [deploy] downy [mildew] treatment 2 days after the rest of the estates. During these days we have some water and so it is different.

SS: Does this help with detecting hail?

Stephane: No, no. For hail, we have what is called MeteoFrance. So they know when the hail cloud is forming and they call you in the morning, or they send a mail, to say that ‘you have a risk or hailstorm, and there are some big clouds forming. They are going to charge on the water and you have a big risk of hail.

But you cannot protect.

SS: So you have analysis but in terms of solutions, how do you deal with each problem?

Stephane: With frost, you don’t have any protection. You just pray! Hail, this is almost the same, because, this is not the same as in Burgundy. In Burgundy they have canons. They have developed it because they have small vineyards. It is only 30,000 hectares. But Bordeaux, all the vineyards are 120,000 hectares.

So you have to imagine that this is so big to protect with canons, it means that we need maybe, 10,000 different canons. Even with this I am not sure…

SS: It would be like World War 2, fighting against nature!

Ha, yes! So we don’t have so much protection.

SS: So what controls or solutions do you have?

Stephane: The only thing we can control is whether we treat or not. If you expect good weather for ten days without any [rain] and the pressure is very low for mildew then you don’t treat. But if you have big pressure, if you are not sure of the forecast for the weather, then you must treat.

So, this all just helps you to decide whether to treat or not. But it is completely different to what my father used to do. My father (and not only my father) used to say that ‘every 10 days we have to treat! Every ten days!

So from the bud bursting to the flowering, every ten days, we take the tractors and we treated. Nowadays, we reflect on whether we have to treat. It is completely different.

SS: It is a heavier question?

Stephane: Yes, it is completely different. Do I take the risk to treat or not treat? If I don’t treat and the forecast is not good for the weather, then I can decide to not treat. If I then have 3 or 4 days of rain then it can be a problem, because my percentage risk of mildew, for example, will be very very high and I will have a risk of contamination.

SS: Have you heard about the trials going on here in Bordeaux using algae to fight mildew?

Stephane: No, but I think the next question will be to find a new process that is much more respectful to treat with. It might be algae or it might be different but what we used to do during the last 50 years has to change.

I think there is always a risk to forbid some chemicals. In Europe they want to stop the use of Roundup, a herbicide. It is one of the most well-known herbicides used all over the world, not only for vineyards but for everything. It’s made by Monsanto. They want to stop it but I think the risk is that they don’t have any other solution. So you can stop selling it but you have to find a different solution.

For me, the future won't be with treatment. It will be to help the vineyard protect itself.

I think the big difference between the wine of today and twenty years ago is not just due to global warming, it is also due to a different way of vineyard management.

SS: You mean of philosophy?

Stephane: Yes. To compare, in 1982 the yield in the appellation was 80 hectolitres per hectares. Nowadays it is 50HL. So we have nearly divided by two. So there is a huge change between a vineyard of 50 HL and a vineyard at 80HL.

SS: It is amazing isn’t it, how, obviously, the winemaker has changed how they think about what they are producing, or the style of what they are tasting and that this then reflects in the consumer who comes back and makes their choices. It all feeds back into the one that you get here? People seem to like fresher wines….

Stephane: But it will be challenging with global warming to make fresh wines in Bordeaux so that is why it is important. I think I told you in London that it is important for me to have very different types of grapes because, like cabernet franc and cabernet sauvignon, it wasn’t really ripening 20 years ago in the vineyard but now, every year, cabernet franc is ripe!

Stéphane Dupuch is the of Château Sainte-Marie and was also the President ofthe Entre-deux-Mers appellation’s ‘Syndicat Viticole'. Nick Breeze  is from Secret Sommelier.

Notes from tasting the wines can be found here: 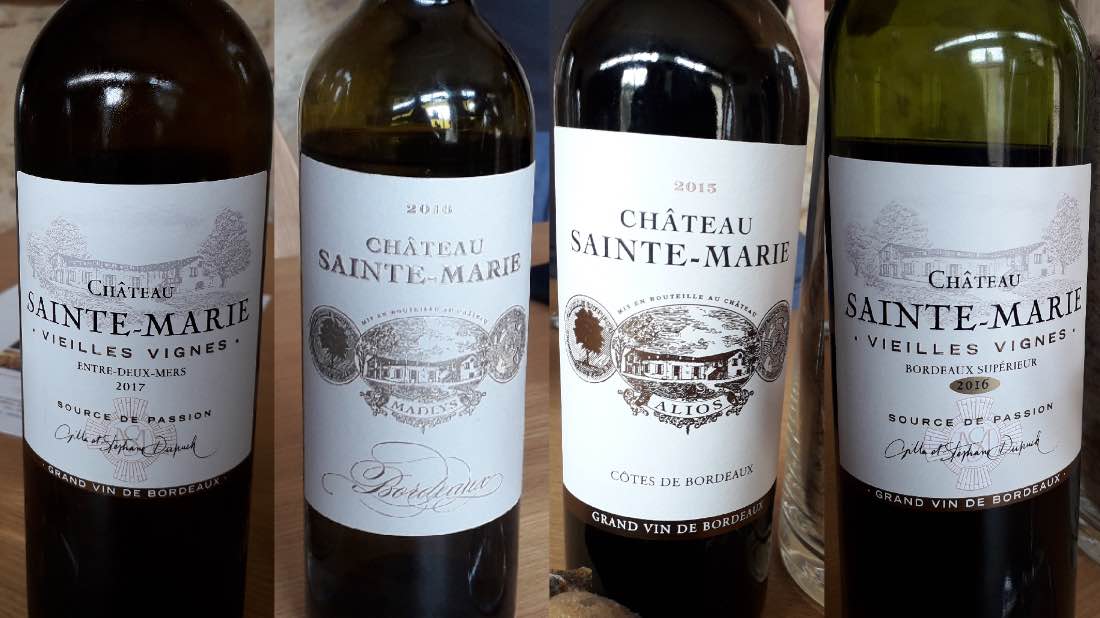